Week 8, the halfway mark of the season… I have no clever analogy to insert for this week, it felt like work this week. Hmmmm wonder if that means I’m about to tap out??

– In what some deemed the battle of the least (I did not name it that) The Rams (my team yes I’m still riding it out with them) finally got their first victory of the season! ::applause applause:: Maybe they can finish the season out strong and go on a tear! I’ll check their schedule to see if that’s likely.

– The Broncos lost to the Ravens. No emotional attachment whatsoever to either team. ::Kanye West Shrug:: Sorry

– In addition to the Saints, my new bandwagon team is the Eagles. DeSean Jackson is the TRUTH! My Ex old team the Giants lose to the Eagles, I love it when an EX trumps a current! ::Smile you love it too::

– I think the Vikings won again (How lazy am I that I refuse to go check LOL) I’m trying to care but it’s just not happening, I don’t know what to tell you!

– Last Night’s Monday Night Football match up was my new beau The Saints over the Falcons. I’m telling you this football dating thing is GREAT, because it allows me to be fickle and drop losers. Something tells me I won’t be dropping the Saints for awhile though. 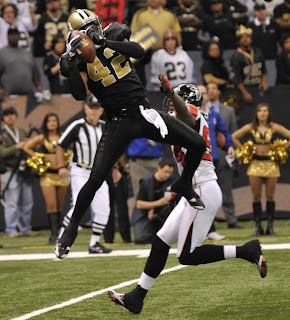 My hope is that this is just a phase for me. You know after the newness and excitement wears off in a relationship and you start looking at things for what they REALLY are. Then you make the choice to stay in it or go searching for greener grass. Since my only grass option is hockey (sorry I can’t see myself watching more than A game of that… actually maybe not even a whole period) I may as well string football along for a bit longer!

Did you notice I didn’t mention the Chargers, 49’ers or Raiders? All west coast teams? Yeah I just noticed too. Oh well Reggie Bush, DJack & SJack are all from the west coast (or in Steven’s case close enough, I’ll give Vegas a pass) so that’s me still “reppin my city”!