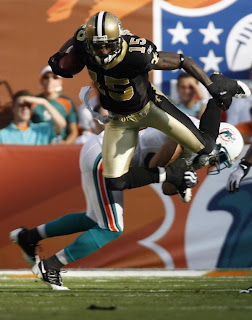 Like I mentioned last week, while I have developed an appreciation for the pigskin (Does that sound as lame as it felt for me to font that?) My heart truly lies with Basketball. Perhaps my anticipation for this day to finally arrive explains why I was once again “tardy to the party” in posting my week 7 wrap up. OR was it my boredom watching the games on Sunday, I’m undecided… Here’s your Week 7 Wrap up:

– When I made the decision to watch football this season, a friend suggested I follow the Saints as they have the excitement I crave and a West Coast byproduct in Reggie Bush. Clearly I made my selection based on superficial reasons but, the Saints are THAT DEAL!! This team came back from being down 24-10 at the half to score 22 points in the 4th quarter (remember what I said about the 4th quarter!) And Reggie Bush’s dive into the end zone was rather exciting! USC’s finest right there (for a moment we’ll forget about his whole Khardashian involvement). Saints win

– The Vikings & The Steelers were the other marquee match up of the weekend. I watched, I vaguely remember some excitement but much like last week, it’s extremely blurry. The champs won this. Outside of admiring Troy Polamalu’s hair (USC, you already know my flow) I simply wasn’t moved. I recognize that I should’ve been. Le sigh

– The 49ers Rookie hold out Michael Crabtree played Sunday. Word is he did pretty well but the niners LOST to the Texans. I don’t think that was what people envisioned happening.

– Rams… Deep Sigh yeah, another lost. 17 in a row dating back to last season. Guess I like the Underdog. These are the rough patches of fandom.

– Yeah the Giants lost too, I might be hopping off their bandwagon and on to the Saints. I explained last week that I am merely dating football and not in a committed relationship with it so I reserve the right to date UP for whoever is hot right now!

– The Bengals beat the Bears. A little bit of redemption going on in this game as Cedric Benson was cut by the Bears. Bengals WIN.

– As the Jets had their way with the Raiders, for some odd reason, Mark Sanchez decided he was hungry and needed a hot dog to make it though the game. Ummm where did he get it from and why did he think that was a good idea? You know I ride for my west coast guys but, I have nothing for that one. Guess winning gives you an appetite.

– Monday Night Football. Last week you recall my excitement When Saints Player Lance Moore did the “Reject” in the end zone after his touchdown. Now granted his execution was poor but still I appreciated the effort. Last night Long Beach native DeSean Jackson gave you the REAL version on his 2nd TD of the night. That play came AFTER he had a 70 yard touch down. He was “ALL THE WAY TURNT UP” (that would be west coast Jerkin slang for, he was extremely excited) Eagles over the Redskins 27- 17.

Last little bit of football related news. Larry Johnson of the Kansas City Chiefs has been suspended indefinitely for comments he made about his coach via Twitter as well as a gay slur he used in the locker room when addressing the media (he also made the same comment on twitter apparently). I LOVE LOVE LOVE Twitter but I don’t understand what some of these guys aren’t getting. If you are that emotional when reading your replies, perhaps you should avoid the responses. There are certain basic things you simply cannot do if you want your career to continue and thrive. It’s pretty cut and dry. But the way Larry’s name always pops up in random scandals, I guess we just must face the reality that his “smarts” are solely on the field.