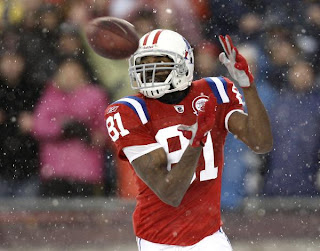 I’m late with my week 6 wrap up. I guess that’s why it’s called cheating cause now I’m looking at my 1st Love with fresh eyes. Appreciating all the little things I was taking for granted. Oh NBA you & I will be back poppin on a full time basis next week when the season kicks off, I promise! In the mean time Boyfriend #2 had a few hot moments.

– The New England Patriots were in straight Disrespect mode! Tom Brady 345 yards, 5 touchdowns in 1 quarter all before half time. Final score Pats 59 Tennessee Titans 0. Yeah Nothing, Not a single point. ummmmm that never happens in Basketball (guess that’s me thinking about my Ex huh…)

– The Saints vs. The Giants was a fun game even though the Giants lost. I might be over them and hoping off their bandwagon (what?? I’m not in a committed relationship with Football, I’m free to date and see if I like another team better) I just might be batting my lashes at the Saints but only because after Lance Moore scored on Sunday he did “The Reject” in the end zone (Check him out @ 1:23 Here

– The Rams lost in Overtime to the Jaguars. That’s 16 in a row since last season…Yeah I don’t really have anything else to say on that.

– Vikings vs. Ravens was exciting in the 4th quarter but one of the reasons you know something isn’t your NUMBER ONE is when you kind of had a good time but you don’t really remember any details. The Vikings won it was fun at that moment but, that’s all I really remember.

– Denver over the Chargers in Monday night football action. I didn’t watch, I had an event to get ready for. ::shrugs:: Sorry

That’s the thing about cheating, at first the jump off is super exciting and enticing but ultimately, they always prove that they don’t have quite enough for you to leave your #1 completely for them!

Did I mention we’re less than a week a way from the start of the NBA season!!! LOL Here’s The top 10 plays of the week: