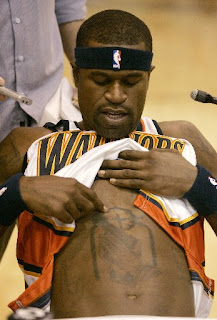 Cold weather (at least the LA version of cold which is still COLD to me, so what if it’s only a brisk 62) not only means time for me to break out fly boots and cutsie fresh pea coats, it also means the NBA season is just about HERE!!!

A little under 2 weeks until it officially kicks off. In the meantime, pre season action has given me a little glimpse into what to look forward to this season. My version of random thoughts or as I like to refer to it, mixed clutch (that’s a cute lil bag with no straps for the guys):

– Ok, again I REALIZE that it’s pre season but how can you not expect me to be excited that the Clippers have won 3 in a row!!! Rasul Butler looks to be a nice addition and last night Blake Griffin scored 23 in a win over the Spurs. Clipper Nation is ready for a resurgence!!

– The Golden State Warriors are a mess and we haven’t even started the season. Stephen Jackson has removed himself as team captain. He’s already had a bench disagreement with Don Nelson (in addition to the 5 fouls and a tech in 10 minutes he snapped up last week against the Lakers) which earned him a 2 game PRE SEASON suspension. The entire league has known Stephen wants out since the summer. The question is, will Golden State be able to get fair value for him? I’d say NO. which means look for this to drag on longer than necessary. I still say Nellie is a coach who LIVES for the drama.

– Gilbert Arenas has been fined by the NBA for NOT talking. 2 years and how many knee surgeries later, Gil has taken the approach of show and prove instead of the usual steady stream of comedy he’s provided (if you never checked out his blog, YOU missed out). I’d like to see the Wizards produce with their Big 3 intact. Antwan Jamison was injured last night in their game against the Cavs, wonder if MJ left a curse on the franchise on his way out the door (I wondered the same thing about the Bulls, they’re still not quite “right”)

– The Nets are without VC now but it looks like Chris Douglas-Roberts has been on a rampage this preseason (averaging 18 ppg in 4 games)and might be taking on the starting SF duties. I follow him on twitter, he seems to have a great work ethic. You gotta love that and respect someone that’s putting in the work to back up the words. The Nets also have Courtney Lee now, they should be fun to watch this year (although winning a lot is another story)

Random fact, although it is just preseason, over the last 5 years 56 of the 86 teams that were over .500 in preason went on to make the playoffs. Thank you NBA.com for that STAT!

And Lastly, a Dub way up for the Dodgers and Angels, both teams have made it to the MLB semifinals and it’s the 1st time that both were there at the same time in the history of the MLB. Whose down for a FREEWAY WORLD SERIES!!!!