:Tap: It’s only 1 tap, I think the rules say you need 2 for it to be official (Whose rules? Mine, I think I made that up if I didn’t hear it somewhere) It’s becoming increasingly more difficult for me to hang on. I really think I’m a playoffs, “hyped match up” kinda football fan admirer. With that in mind, I think that week 13 (what an ironic number to fall short on) might be it for me. Yes I say that weekly but…. sigh

– The Saints are still undefeated although they just barely made it out with a win. Redskins fans saw they’re hopes peak then crash as the Skins let the game slip away. The Saints are better, that’s all. WHO DAT!! (it’s fun to say) 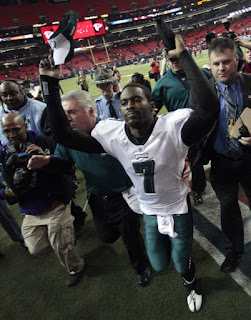 – Michael Vick made his return to the Georgia Dome Sunday and was received with open arms by the fans. I’m truly happy for him! Philly of course won the match up AND Vick got his 1st touchdown of the season. How fitting!

– I haven’t forgot about the Rams. They’re still my team. But there’s just nothing really worth mentioning.

– I know some people feel Ocho Cinco is doing to much with his touchdown celebrations but for a fan such as myself, he brings a much needed entertainment value. This Sunday he donned a poncho and sombrero after he scored. Come on they were playing the Lions, who have already reached their good game quota for this season. 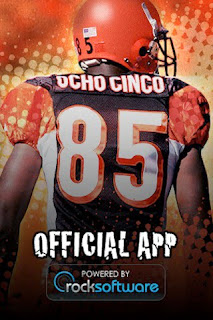 – Speaking of Ocho, his iPhone app is free for the month of December. I downloaded it just to take a look. Cute idea but not something I’m enamored enough with to continue to let it occupy space on my iPhone. Come ON they have shopping apps and stuff  I Like NEED in my life. 🙂
The developers of his App are creating one for Terrell Owens and in discussions to produce one for Dwight Howard also(Ok, I KNOW it’s not football related but GOSH)

– The past few weeks I’ve been neglected to include highlights. So back by popular demand (or for my own entertainment)
Week-13-highlights