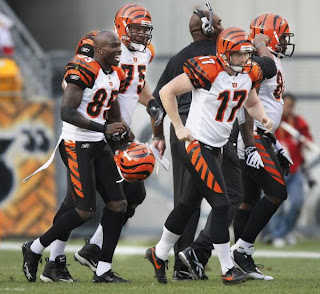 – Are the Bengals about to become my next team of choice? I already mentioned how entertaining Ocho Cinco is but his team has shown that they are serious contenders for in Feb (or is it Late Jan.? I’m not sure) Sunday, they beat the Steelers for the 2nd time this season; they’re 5 and 0 against teams in their division. I’ll put them on my maybe list as someone I might be interested in later on down the line.
– Last Thursday was the debut of Thursday night football. Something I will never see unless I watch online because Time Warner and the NFL can’t kiss and make up. The Bears loss and according to my twitter timeline that night, Cutler sucks!
– The Rams played the Saints on Sunday (that’s like 2 guys you’re dating ending up at the same open gym run) That means you cheer for everything! It was actually a close game but the Saints escaped (yes escaped they really almost lost this game) unfortunately for the Rams “Almost doesn’t count”
– ‘s team (That would be the Cowboys as I was informed) lost to . Yep, I have nothing of substance to add on that.
– lost to somebody wack. Was their heart was cut out after last weeks Monday Night Football loss?
– The marquee match up of the weekend was the Colts vs. The Pats. The Pats lost, This is a HUGE rivalry that I have absolutely Zero interest in. Someone please share with me why I NEED to care about it.
– So last night as I was getting ready to go out to dinner (Sushi at Nobu. LOVE IT!) I flipped to MNF, it was half time and nobody had bothered to score. So I didn’t bother to check and see what teams were playing or who won. Take THAT underachieving football teams (ok I think it was the Browns and the Ravens but honestly, I was so put off by that, I kept it moving to the Bucks & Mavs in overtime NBA action) 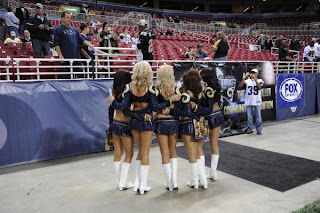 * Stuff from the Sidelines
– Larry Johnson has signed with Bengals. Do they really need him?
– Dwayne Bowie WR for the Chiefs has been suspended for violating league policy on performance enhancing products. Really, people are still getting caught up in this in 2009?
– The Buffalo Bills have fired coach Dick Jauron. yeah that’s what usually happens when your team SUCKS. lol
Week 10 Highlights