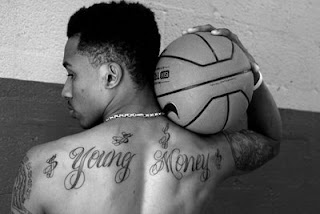 – I have to start with Brandon Jennings going for 55 on the Warriors Saturday night. Brandon went from high school to overseas for a year, toughed it out and now is showing the League that he had a reason to talk Sh*T and let doubters know he was better than Rubio!

Let’s also not forget that he crushed Kareem’s rookie record with Bucks for most points scored (It’s only Nov.) And he’s smart with his funds!! He purchased a Ford SUV because he wants to be smart with his money oh and the best part, He’s FROM LA!!!!

– Dwyane Wade does it again, hits the game winning 3 with .10 seconds left in the game.Miami over New Jersey, that lost had to hurt as it would’ve been the Nets 1st win. The Heat was my team on the East for awhile (back when they had the rivalry with the Knicks). Guess I’ll keep my red & black pom poms!!

– The Thunder have a great core, they’re fun to watch and Kevin Durant will be an All-Star SOON. Saturday night they shocked the Spurs (Tony & Timmy were back in action can’t blame that). The Spurs looked really old playing the kids. I told you they’re on the downside.

Of course Sunday night I had to go against them as they were playing the Clippers. Clippers WIN (redemption for their lost to OKC on wed.) Fun game to watch, be sure to catch a few Thunder games this season. You won’t regret it.
– The Lakers were bitch smacked (you like how they went from MY Lakers to THE Lakers, fickle fan j/k) on Friday night by the Denver Nuggets. Expect trouble from them all season right into the playoffs. Not to mention this dunk on DJ Mbemga (this seems to happen to him a lot) Oh yeah Ty Lawson is only 5’11, DJ is 7’0.

So after that embarrassment on Friday, of course I expected the Lakers to redeem themselves on Sunday against the Rockets. Trevor Ariza was presented with his ring by Derek Fisher and Kobe Bryant. Classy move by a first class organization. But then what do THE Lakers do, Lose. Le sigh.

Ok, I know Pau is still out, Ron Artest is still getting acclimated and Kobe has a groin strain but must the losses be so dramatic? No excuses but like I said earlier, it’s only November.

– More trouble for the Hornets, not only do they have a new coach, they’re best player CP3 (Chris Paul I shouldn’t have to tell you that) is out with an ankle sprain. There’s no timetable set for his return at the moment. Hey New Orleans at least you have the Saints right?? I’m kidding… kinda

– So is Memphis the home to exiled 30 plus point guards now? They signed Jamaal Tinsley to a 1 year minimum deal. Guess everybody fully understands what they’re getting into this time around right? Ummm has AI received a buyout yet? Placed on waivers?? NO??? yeah that’s what I thought.

– Captain Jack escapes the bay, FINALLY. Stephen Jackson has finally been traded. I’m not even sure who really benefits from this trade. Stephen and Acie law were traded to the Bobcats in exchange for Raja Bell and Vladimir Radmanovic. Now who is Nellie going to ride this season?