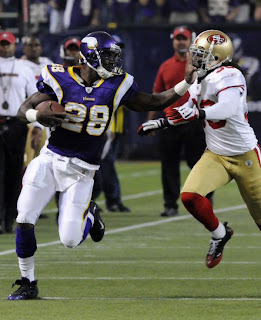 Well kids, week 3 was a little rougher on me. Maybe it’s because I knew today is the official start of the NBA season (MEDIA DAY) or maybe the novelty is starting to wear on me. In spite of all of that, I press on.

– Brett Farve threw an incredible pass during the final minute of the 4th quarter of the Vikings vs. 49ers game. But why aren’t more people talking about the guy who caught it? I watched the replay about 20 times and still don’t know his name! Vikings pull out a last minute victory over the niners. See why I say the last quarter is what I should focus on.

– The Lions FINALLY win their first game since 2007. Over on Twitter one would’ve thought they won the Superbowl. At least they have that off their back. The Victim, The Redskins (more proof my Rams beat themselves last weekend)

– Speaking of my Rams, they had their home opener against Green Bay. LA Rams Legend Deacon Jones was honored (I have no idea who that is but my daddy said he’s important in Rams history so I thought I’d mention it). The Rams did NOT win. yeahhhhh

– It was a great day for NY teams (I mentioned last week I adopted the Giants and Surprise they win again!!) The Jets won as well, I’m going to go out on a limb and say that Mark Sanchez had A LOT to do with it!! Anybody know where he’s from (Dubs up everybody)

– Tonight of course there’s Monday Night Football featuring The Carolina Panthers vs. The Dallas Cowboys… YOU can update me on how that one goes.

And of course the weeks Top Ten Plays according to Deon from NFL.com
https://www.nfl.com/videos/nfl-network-gameday/09000d5d812fbb90/Let-s-Go-Primetime