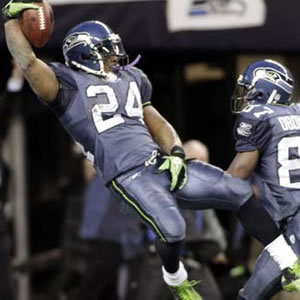 Last Sunday, Seattle Seahawks running back Marshawn Lynch set a career record with a 79-yard touchdown. When Lynch got to the end zone, his celebration suggested everyone to take hold of his naught bits.

That didn’t go over so well with the powers that be at the NFL. Lynch has been fined $11,050 for “unsportsman like conduct.” This isn’t Marshawn’s first fine from the L this season, he was also fined $100,000 for refusing to speak with the media earlier in the season.

The amount is a bit curious however, its about $1,000 less than members of the Giant were fined for their on-field scuffle with the Rams.