It’s week 10! We wait so long for the football season to start and than it goes by like a flash of light.

Raiders vs. Chargers
I was worried for the safety of the Chargers fans this week. Yes, San Diego was at home, but Oakland fans run rampid here in Southern California. Don’t ever make the mistake of tailgating at Qualcomm Stadium when they are playing the Raiders. It’s definitely a frightening experience.

Indy
Poor Indianapolis. 9 weeks and 9 lost. Just because, I think this is the week they will get their first win. Hopefully!

The J-E-T-S vs. New England
If you read my weekly picks you already know that I am a Jets fan. Unlike most of you who jumped on the Rex Ryan bandwagon after watching HBO’s Hard Knocks, I have been a Jets fan since 1997. Admittedly, I became a Jets fan when I jumped on the Bill Parcells 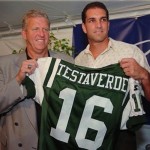 wagon. Residing in New York at the time, I lived for Sunday football and often braved the cold to sit at the Meadowlands. Those were the days. Every week Vinny Testaverde made me mad and I always got excited to see Parcells match up against his old team, the Patriots. Those damn Patriots have been a throne in my side ever since and like most “real” Jets fans, I always root against the Patriots even when they aren’t playing the Jets. You already know who I am picking this week. I love the AFC East!

Speaking of the Patriots… while they quietly got rid of that dead weight known as Albert Haynesworth, the Bucs acquired him off waivers.
READ MORE