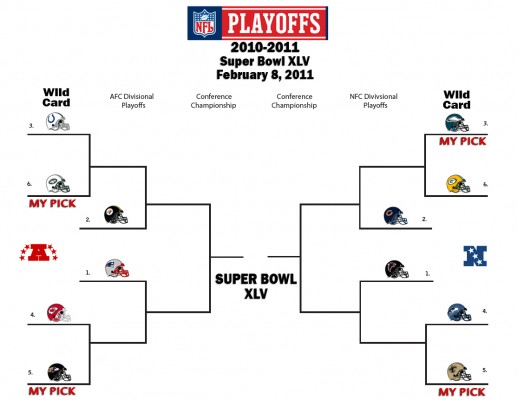 Just like that the regular season is over! Wow! As I said last week, the 2010-11 regular NFL season played out like a soap opera. It started off with my J-E-T-S and their never ending saga and ended with Bret Favre still dealing with allegations of sexual harassment. I really can’t remember a season filed with so much drama. The funny thing is none of the drama was centered around the usual suspects (T.O.). Imagine that! T.O.’s season was quiet and he played pretty darn good until he was injured. Does anyone know what happened to Randy Moss? I guess the Vince Young saga overshadowed him. I am so over him. Grow up! No dude, really! Moving on…

As you can imagine, I am super excited about my J-E-T-S making the playoffs; HOWEVER, I was dumbfounded to see that they were playing Indy. I ALWAYS cheer for Indy. In my eyes Peyton Manning can do no wrong. I have a tough dilemma on my hands. Being the J-E-T-S fan that I am, I have to ride out with Rex and my boys. Ask me next week how I feel. Of course, I am excited for Michael Vick and will bet against any team he plays during the playoffs. I am sure it’s a fools bet, but I like an underdog!

Below are my picks for the 2011 NFL Wild Card playoffs. Remember anything can happen on any given Sunday, Drink, and pick responsibly!

About me: I am a producer, managing editor (MankindUnplugged.com), writer… aspiring professional bowler, creative, quirky, all around Jane of all trades and just a little offbeat. I am an avid football fan and I blame my obsession with sports gambling and picking parlays on an ex-boyfriend… funny thing is that’s all he was good for.