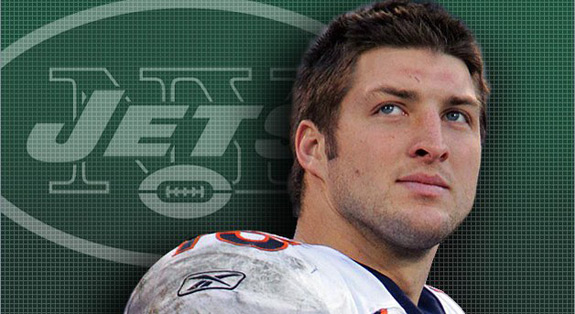 Tim Tebow was traded to the the New York Jets and whether we like it or not, the New York City tabloids have kicked off the Tim Tebow campaign. I am NOT ready for Timsanity, are you? It’s no secret that I am a huge J-E-T-S fan. My love affair with the Jets began in 1997 when I fell head over heels for Bill Parcells. ’97, that was the year.

Paul Tagliabue was the commissioner, the Jets were still playing in The Meadowlands (Giants Stadium), we drafted James Farrior with the 8th overall pick…the year before we picked up WR Keyshawn Johnson with the number one pick, Curtis Martin was still playing for the enemy (New England Patriots), our starting QB was Neil O’Donnell (later Glenn Foley), and Ray Lucas was our backup quarterback. We went 9 and 7 that year and ended up 3rd in the AFC East.

Admittedly, our team wasn’t Super Bowl caliber, but Bill Parcells made me feel as if something good was going to happen. It wasn’t until 1998 that the team started to shape up with the acquisition of QB Vinny Testeverde and RB Curtis Martin. Although we didn’t have any draft picks in 1998 (and 1999), Parcells put a team together that was ready for war: 12 and 4 with a winning percentage of .750, 1st in the AFC East and battling the Denver Broncos in the AFC Championship Game definitely wasn’t bad.

When Parcells left the Jets my heart was broken, but then Herman Edwards came along. He was EVERYTHING in my eyes. He had the swagger of Bill Parcells and
READ MORE