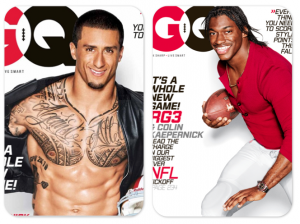 San Francisco 49ers breakout star Colin Kaepernick and Washington Redskin Robert Griffin III are featured on dueling covers for GQ magazine’s September NFL Kick Off issue. GQ chats with both QB darlings on topics like being underestimated, race and more. Check out a few excerpts from the interviews:

Colin on being underestimated:

“I think the biggest part of my game that’s underestimated is the mental part of it,” he says. “Probably because it’s invisible. You can’t see the hours I put in. It is funny to me that because I can run, because I’m athletic, people tend to see that as my only asset. And that’s fine–I hope they continue to see it that way [and underestimate me]. Look, I won’t say that view is ‘racist.’ I will say that it’s stereotypical. I’ve just heard it so many times before.”

…on experiencing prejudice as a mixed-race boy adopted by two white parents:

“On summer vacations, it happened every time,” Colin says. “We’d be checking into a motel and somebody would come up to me as I’m standing next to my family, all nervous, and say ‘Um, can I help you with something?’”

RGIII on recovering from knee injury:

…on Rob Parker’s comments about him and his “blackness”:

“There’s some wrong is what he said, but there’s some wrong in him losing his job as well. And I don’t want people to think that I, you know, that I’m trying to stick it to Rob Parker, or that I’m happy he lost his job. But I was very unhappy with the things he said. I mean, why did he say that?”

…on McNabb publicly criticizing him:

“I don’t think Donovan is an idiot by any means,” Griffin told me. “But right now, it’s probably best that we don’t talk.”

“I was lost when they said, ‘Brittney Griner came out today,’” Griffin tells me. “I know Brittney. I’m close to Brittney. Griner was never in. Everyone knew that.”