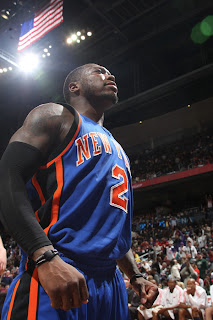 – D’Antoni response to Nate’s Magic: he’s cool, he won the game for us tonight BUT, we need to focus on winning as a team.

::pom poms down:: What??? 14 games he sat Nate, will he be able to justify doing it again? Clearly Nate’s talent isn’t the question. Is a coach justified benching a player who they feel isn’t working within the team framework even if that player is a monster on the court??  I guess we’ll find out!
::bookmarks this topic for exploration at a later date:: 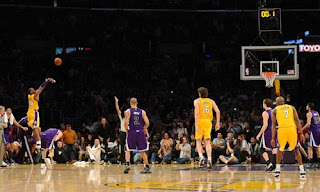 * Kobe does it again to start the decade. A 3 at the buzzer FOR THE WIN! Lakers pretty much trailed the whole game. A more experienced Kings team probably would’ve won this match up but Kobe IS Super Human (already forgot about Lebron’s performance on his Birthday)
Hmph! WEST SIDDDDDEEEEE

* Just let me enjoy this victory for a minute and then we’ll discuss why the Lakers have been playing like trash since Christmas. (smile, either way you’ll love the discussion)

Fun Laker Stat: The Lakers are 6-0 in games decided by 3 points or less

– Clippers ended the decade on an up note beating the Sixers. You know what they say, how you bring in the new year is how you’ll remain for the duration. LET’s GO CLIPPER NATION!!


– Gilbert tweeted up a storm on Day 1 on just about everything. (being John Wayne-esque, Shaq being Boyfriend #2 to his fiancee) Like EVERYTHING… I just can’t… at least not today! ::he he he:: 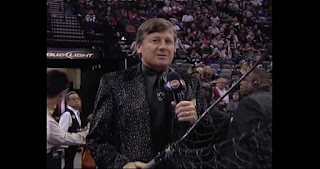 – Craig Sager’s suit. Yes, that’s really satin and crystals to bring in 2010. I wonder if it has an electric outlet too. (photo courtesy of 3030FM.com)