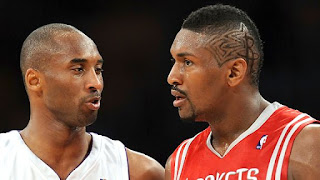 So it appears last summer’s dream is finally a reality. Last summer had things played out the way they were supposed to, Ron Artest would’ve opted out of his contract and signed with the Lakers. Ron Artest is a LAKER!!! (or will officially sign next week even though Ron Tweeted he was signing the contract the other night)

Fast forward a year later and the dream is now coming to fruition. Kobe & Artest have been friends for awhile, that wasn’t just playoff hype. This is something that has been talked about for quite sometime. 3 years 18 million and the Dynasty part 2 will begin again! Ron can play the 3 or 4 and his defense is something the Lakers can definitely use as the East reloads. Of course this means that Trevor Ariza won’t be back with the team but he’s lived his own dream, playing for the hometown team (Trevor went to Westchester High here in L.A. and spent a year at UCLA) now it’s time for him to go get his money elsewhere. This is his 3rd contract but his first chance to earn real money.
The League looks to be reloading for next year, anybody who says the NBA’s glory years have passed hasn’t really watched an NBA game in quite sometime.
LakeShow 2010 Champs baby! Reserve your spot on the parade route NOW!!