Athlete’s love a referral. No matter if it’s a place to buy a car, jewlery or women, professional athletes seem to love going after what their fellow man has.

Today’s example involves Memphis Grizzlies forward Matt Barnes and Knicks head coach Derek Fisher. The two were teammates on the Lakers from 2010-2012. Per the New York Post, Derek and Matt had a physical altercation over the weekend at the home of Matt’s ex-wife, former reality TV star Gloria Govan. 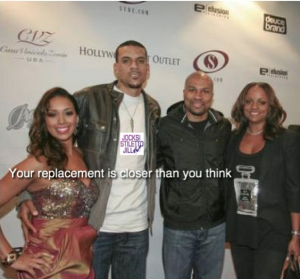 Matt showed up at the house after finding out that the newly separated Knicks’ coach was at Gloria and Matt’s former home. Matt reportedly has known about the relationship for at least a month.

It would also explain why Gloria was so chipper when rumors sparked that Matt and pop star Rihanna were dating.

Fisher reportedly left before police arrived. Matt was traded from the LA Clippers this summer to the Memphis Grizzlies. The Griz are in NBA training camp 95 miles away from LA. Matt allegedly made the drive to rough Derek up.

The NBA has been made aware of the incident, and along with the Grizzlies and Knicks, will investigate the details, according to Yahoo.

Fisher was asked about the incident at practice and said he keeps “personal matters personal.”

Glora Govan is a former reality star that was featured on VH1’s “Basketball Wives” franchise. This isn’t the first time Matt has gotten into it publicly over Govan. A few years back, Matt and rapper the Game went back and forth over Twitter about his then fiance.

The ex-couple have two twin boys and filed for divorce earlier this year.

In my book PostGame Pass: access into “the life” I break down why athlete stay within the same dating pool. And how ego plays a role in that as well. Matt Barnes and Gloria are one of the couples I highlighted.

Available now on Amazon and Barnes and Noble