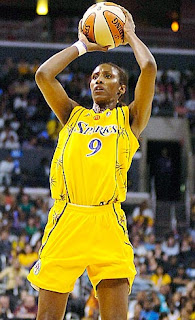 Last night’s win against the Seattle Storm was the beginning of the end for Lisa Leslie. Her final playoff run with the LA Sparks.

Growing up in LA, Lisa has always been entrenched in the basketball landscape here. From her high school years at Morningside High where she scored 101 points as a senior in an attempt to crush Cheryl Miller’s record of 105 points. Through her time at USC, where she set the PAC-10 conference records for scoring, rebounding, and blocked shots while earning her Bachelor’s degree in Communications.(side note Tina Thompson was a teammate of Lisa’s at both Morningside & USC, yeah LA female ballers are Legendary!)

In the summer of 1996 which many considered “THE” year of the women in sports, (hello Mia Hamm, Dot Richardson, Kerri Strug) saw Lisa and her fellow Olympic teammates dominate on the world stage at the Olympic games in Atlanta. Lisa led the women’s team that summer averaging 19 points per game and scoring 29 points in the the Gold medal game against Spain.

Which ultimately set her up as the face of the WNBA (does anyone remember the other women’s league that started at the same time? No not really… ok)

Future Hall of Famer, no doubt. A short list of some of Lisa’s accolades:

All this while still showing the world she was “Model material” (you know she had a contract with Wilhelmina modeling agency at one time) Throw a dub up for Lisa, one of the best to ever touch the hardwood… and she’s from LA (yeah had to remind you of that)