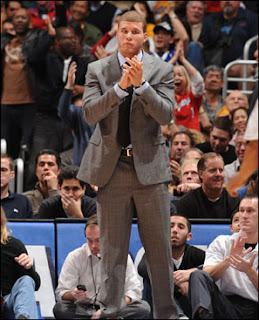 My Clippers can’t catch a break. 1st a water mane breaks last night in the FedEx forum so the game had to be stopped in the 3rd quarter (thus stopping the Clippers winning momentum) and ultimately the Clipps came back and lost that game. And now more bad news on the Blake Griffin front…

The season that never was:


After experiencing some discomfort during his recently-accelerated rehabilitation program, Clippers’ forward Blake Griffin was examined Tuesday afternoon by Dr. Neal ElAttrache in Los Angeles. As a result of that examination, it has been determined that the healing in his left patella area has not improved to the expected required level. Griffin will undergo a surgical procedure in the near future, with a recovery prognosis of four to six months. Team personnel will be made available to the media. Further details will be made available as events develop.
Previously on December 23rd, after undergoing a CT Scan and MRI Griffin had been cleared to increase his rehabilitation workload.
Griffin, the first overall selection in the 2009 NBA Draft, suffered a non-displaced stress fracture of his left patella during the Clippers’ last preseason game vs. the New Orleans Hornets on Friday, October 23rd