It was a major weekend in sports with the focus of course on the NFL wildcard games. So technically this is the time that I’m supposed to be back creeping with my sidepiece football right?

And if I’m being honest, I did… a little but it’s like how your main gets radar when you start paying too much attention to outside activities and steps their game up. That’s what happened but read on to see how it all plays out. ::CHEESE:: (That’s me flashing you my brilliant smile)

– The Jets topped the Bengals in what I think was a pretty good game. Mark Sanchez (I don’t even have to say it, you already know) held his own like a true West coast Ride or Die Warrior. I am a little sad that I won’t be further entertained by Ocho cinco BUT, yesterday he tweeted his purchase to start the process of consoling himself over their lost. 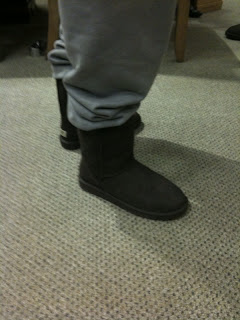 Let me just go on record and say a man should NEVER… EVER… EVER wear Uggs. I do not care how masculine you are, I do not care if you like how they look. EVER… are we clear on this concept?? Please believe I tweeted my thoughts to him as well.

– Cowboys beat the Eagles, This game was pretty dull. It never even seemed like the Eagles arrived at the Stadium. Eh on to the next one.
– Cardinals & Ravens won their match ups. No views from me. SORRY

– What I did  notice was the amount of promo NBC did for Charles Barkley’s SNL guest hosting gig. I expected more, it was pretty blah. And you’d think at this point Chuck would’ve learned how to read from a teleprompter. womp womp.

– Guess who is 1 of 2 undefeated teams in 2010??? THE CLIPPERS BABY!!! Not only did the Clippers beat the Lakers last week (sometimes the lil brother has to win to keep it interesting)but,they destroyed the Heat on Sunday from opening tip until the final buzzer. Mmmm hmmm that’s right Clipps are winners of their last 4 of 5 games. 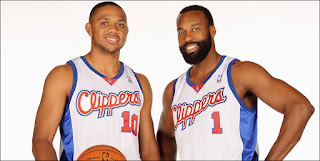 – The Thunder are on my list of favorites. Kevin Durant will probably be a part of Team USA and SHOULD be an All-Star next month in Dallas. But what you may not have known was that he has a crazy crush on Keri Hilson. One of his friends hooked him up with a twitvid from her, I thought it was so cute I wanted to share:
Let’s just say KD and his teammates were going crazy on Twitter after this was posted. Sometimes I think they forget that there are thousands following them and they aren’t just texting but I enjoy it.
– Speaking of Kerri and Teyana Taylor (that would be the friend) their footwear from the Celtics vs. Hawks game. So far the Hawks have beat the Celts 3 times this season.YEAH Boston fans start getting ready to hop off the wagon… 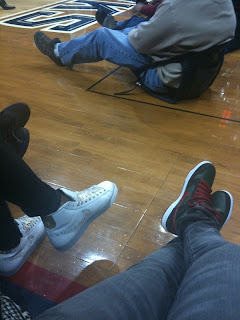 Blazers & Dunks, 2 of my personal favorite styles. THUMBS UP!