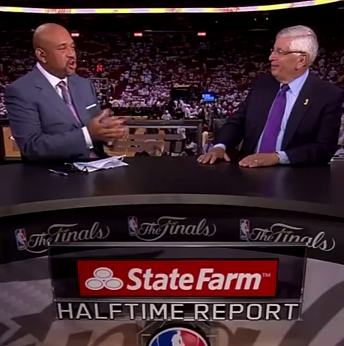 During halftime of game 3 of the NBA finals, ESPN’s Mike Wilbon interviewed Commissioner David Stern. Wilbon asked Stern about the conspiracy rumors that surrounded the NBA draft lottery with the newly sold New Orleans Hornets – owned for a year and some change by the NBA. A recipe for theories and rumors of impropriety – landed the number one pick in the 2012 draft.

Stern managed to keep his cool this time, unlike his interview late last week with Jim Rome who posed a similar question.

Stern is a smug little character. But if you’re looking for his out date, seems like he’s planning to stick around until at least 2018 when the collective bargaining agreement can be looked at. He has no desire to go through that negotiating process again.