I’ll admit it, like a bunch of other people out there, I have a love/hate/love relationship with reality TV. When it’s good it’s as addicting as twitter (I TWEET A LOT) when it’s bad, it’s a train wreck, I watch anyway. Well sometimes, not all the time… Celebrity Sex addicts, yeahhhh I’ll pass but anyway, If you’ve peeped my bio, I sum up your experience with me as ESPN meets Sex & The City so when not 1 but 2 reality shows promise to combine some of my favorite elements I’m automatically on high alert: 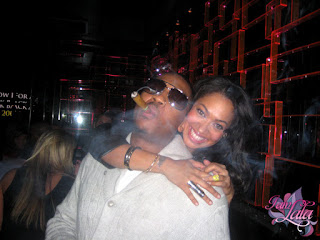 * Carmelo Anthony & his fiance Lala Vasquez’s production company Krossover Productions have  started filming a reality show (not featuring the couple) titled “Love & Basketball” (such an original title) Which will feature 3 basketball stars quest for love…I have a REALLY sassy comment to make but I’ll refrain FOR NOW. This is another show that my DVR will be set for. I can just imagine the quotables I’ll take from this show.  The show is being produced in conjunction with Simmons-Lathan productions.

Let me add that I loved the Mike Tyson documentary that Krossover produced. But keep in mind that was a finished product when they purchased it. Hopefully they’ll keep the quality high while still adding enough kicks and giggles to appease my soul.

* Yep I have another Gilbert Arenas update that falls in line with reality TV… kind of. Turns out the security cameras in the Verizon Center may have captured the entire ordeal between Gil & Javaris per TMZ.  1 slight problem, they’re having a hard time downloading the footage. I’m sure if they brought in TMZ’s people they’d be able to extract the video. If it’s accessible, I’m sure it’s just a matter of time before it hits the internet.

* I previously mentioned the reality show Basketball wives is set to air this coming March on VH1. Filming has started today in Miami. Can I mention again how EXCITED I am for this show!! Brings a whole new meaning to March Madness for me. Fear not I promise that I plan to do weekly recaps with Jill’s commentary (you never know my recap might be better than actually watching :wink:) I think I’d make a great host for a reunion or weekly wrap up show.