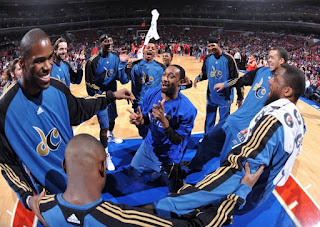 The message is clear in the suspension of Gilbert Arenas… DO NOT embarrass David Stern. 4 months ago Delonte West was pulled over with not 1, not 2 but 3 guns (one being a shot gun in a guitar case). While his legal case is pending, the league has yet to take action against him. Why?? 1. That is their usual protocal which is fair but 2nd and probably more notable,  Delonte has kept a low profile.

In previous posts, I highlighted some of the debauchery Gil has been tweeting, that coupled with last night’s impromptu “gun dance” in the Wizards game against the Sixers, it appears as if Gilbert wasn’t quite grasping the severity of the situation. Signs also seem to indicate that the Wizards will probably try to void his contract once everything plays out.

I wonder if the Player’s union will intervene on his behalf. Gilbert doesn’t have an agent but he does have legal representation.

Hope he’s made some wise investments and has a stacked rainy day fund. David Stern’s statement:

By Official Release
Posted Jan 6 2010 4:05PM
NEW YORK, Jan. 6, 2010 — National Basketball Association Commissioner David Stern issued the following statement today:
“The possession of firearms by an NBA player in an NBA arena is a matter of the utmost concern to us. I initially thought it prudent to refrain from taking immediate action because of the pendency of a criminal investigation involving the office of the United States Attorney for the District of Columbia and the Metropolitan Police Department, and the consideration of this matter by a grand jury sitting in the District of Columbia. For the same reason, I directed the Wizards to refrain from taking any action.
Wizards personnel continue to be interviewed by law enforcement authorities, some are scheduled for appearance before the grand jury and the investigation is proceeding with the intensity that one would expect for such a serious incident.
“Although it is clear that the actions of Mr. Arenas will ultimately result in a substantial suspension, and perhaps worse, his ongoing conduct has led me to conclude that he is not currently fit to take the court in an NBA game. Accordingly, I am suspending Mr. Arenas indefinitely, without pay, effective immediately pending the completion of the investigation by the NBA.”