I know, I know. I’m LATE but cut me a little slack, I got distracted with that whole Black Friday, Cyber Monday shopping thing. It’s EPIC in my eyes, I love to shop! Ok here’s your mixed bag of what’s on my mind:
– I really think I’m about to tap out on this football thing. I’m over it. BUT, I did catch The Saints vs. Patriots game on Monday Night Football. Twas GREAT!!! Saints 11-0 “WHO DAT” (isn’t that what the Saints fans yell? I’m a bandwagon fan, I can’t keep up)
– My other football highlight, Prince at the Vikings game.  Not because I’ve never seen him at a sporting event, I have. Timberwolves games with Jimmy Jam (you KNOW that hasn’t happened since KG left), Laker games etc. But Prince in the skybox sent a bunch of NFL fans on twitter into Shock. See the NBA has better cameos!!  Check the SPOTTED section later in this post to illustrate my point. And NO, I have no idea who won the game!
– Last Friday, 3 NBA players (Rasheed Wallace, Tyson Chandler & Amare Stoudemire) were fined by the NBA for violating its Twitter rules. Sheed was ref bashing (are we surprised Mr. Tech himself, I love Sheed COMEDEY) but the one of interest to me was for Tyson Chandler, his tweet was during a game, which is against  NBA rules for Twitter BUT, it was done via a feed that automatically publishes posts. Should he still be fined? I say No but I don’t make the rules.
– The Lets get Shannon Brown into the dunk contest movement has officially been taken on by the Lakers! There’s a website Letshannondunk.com & a twitter by the same name. Check out his highlights! We NEED this is our lives!!
– Didn’t I tell you not to get emotional re: AI’s retirement? THE ANSWER is back in the place that started it all. Al Illy’s in Philly (yes I took it back to the 90’s SO, AND lol). AI signed a 1 year- prorated non-guaranteed contract with the Sixers (that means if they change their mind or he does, they can part ways with no further obligation to each other). It works because Lou Williams is injured, it works because he’ll put fans in the seats, and it works because he accepted a nonguaranteed deal. Now all we need is his mom to dig out her “Allen Iverson’s MOM” jersey she used to rock courtside (at home AND away games) and my trip down memory lane will be complete 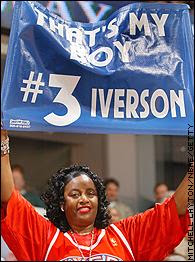 His first game will be on December 7th against… THE DENVER NUGGETS.
– In news that doesn’t shock ME but may surprise you, Ron Artest admitted in an interview with The Sporting News that back when he played for the Chicago Bulls, he’d sip a little “Henny” (That would be Hennessy Cognac for the more refined) during half time. Why am I not shocked? This is the same guy that after his rookie year applied to Circuit City because he had basically spent all his money. He was politely told that situation probably wasn’t feasible. ::giggles:: I love it!
– Apparently Derrick Rose won “Chicago’s Sexiest Athlete” *Blank Stare* ummmm who voted? And why wasn’t Matt Forte of the Bears nominated cause ummmmmm, yeah. That’s all
– My “GEE THAT’S AWKWARD” moment on Twitter: Me being me, I was commenting on Dennis Scott’s choice of attire on NBATV’s  The Jump. To be exact, I said it looked like he had on a flashback 1990’s silk 2 piece complete with high water pants… Apparently DScott likes to search for his name on Twitter. He replied to my tweet with “Thanks Jill LOL”. Glad to see he has a sense of humor, now let’s work on a sense of style. here’s his twitter if you’re interested
SPOTTED: Courtside
Lala Vasquez, Carmelo Anthony’s fiancée rocking a HOT pair of Pierre Hardy booties. This was the night Melo went for 50 on the Knicks! 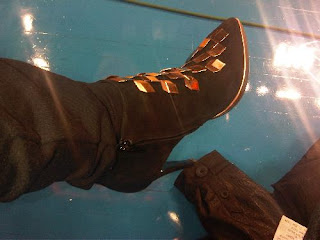 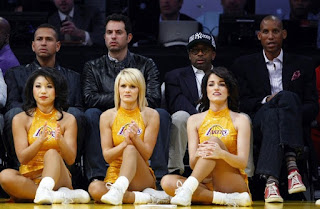 Ok, I realize that Brandon Jennings wasn’t spectacular in the game last Friday but Kevin Durant & The Thunder WERE!! And even though it was in OKC, I found a spotted picture for you… Actually, it’s just a Twitpic because who takes pictures of the crowd in Oklahoma City??? But he’s kinda sexy and I like eye candy to! The LA Dodgers Matt Kemp. 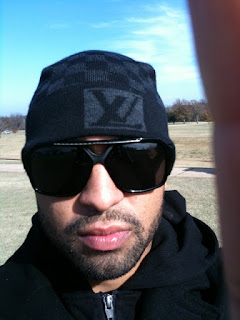 What?? He tweeted he was there and he tweeted this earlier…
And lastly ME in the Chairman’s lounge at Staples Center (This is the secret room you see those sitting courtside vanish to at halftime) The Bartender decided to treat us to a Scooby Snack… Yeah I had never heard of it before either! It was milky and green but surprisingly tasty! 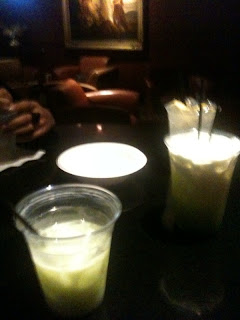