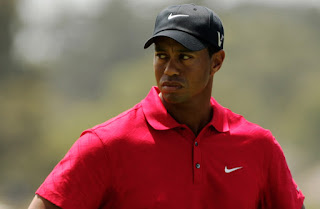 I know you’re probably SO SICK of hearing anything Tiger Woods related that isn’t about golf! I am too but, this whole notion of a press conference disturbed me. I stated back in December that the only person Tiger owes an apology is his WIFE. I still stand by that.

Tiger’s PR team has handled this badly in my personal opinion, they didn’t address this in a timely manner, the leaks etc. But now we’re here so might as well add my thoughts on his “apology”.

People are shocked when I say that I believe Tiger’s cheating days are behind him. Look clearly the man isn’t BUILT for this type of pressure. He’s incredible on the golf course but that’s not what we’re talking about here. Right now Tiger is raw and exposed. Something he’s managed to avoid for the majority of his career. I understand that part of this “apology” was to help appease his sponsors but as Kobe has shown, winning cures everything. Will Tiger be able to return to his previous pristine level, probably not but nobody stays on top forever. As far as his career goes, if he resumes play at the top of his game, this will eventually be a footnote that while not forgotten simply will be overshadowed.

Tiger also went on to say that his wife was not at fault and chastised the media for alluding otherwise. I do appreciate him taking full responsibility for his actions but he didn’t OWE any of us an apology. Just the woman he pledged his fidelity to. ( I don’t believe him when he says his wife didn’t strike him, but my opinion on that in the grand scheme of things is irrelevant)

I think holding a press conference when he already released a statement saying all of this created a spectacle yet again 3 months later. Case in point, one of his side chicks held her OWN press conference (Gloria Allred you’re a bottom feeder for encouraging this foolishness) to say how she feels Tiger owes her a public apology ::Blank stare:: YOU CANNOT BE SERIOUS. But she was, we all know the main motivation for these women coming forward to tell their story is monetary. But in a odd way I feel that the way this has been handled by Tiger’s camp has allowed them more leverage because they were allowed to speak 1st and were given the space to shape or create the circumstances of their “relationship” with Tiger. Obviously they were destined to come out but would it have had the same sting if Tiger’s statement release back in late November had addressed the same points he made today and then shut down? My gut says no.