The Spurs have issues and not just because they were beaten into submission last night by my Lakers with no Kobe or Andrew Bynum. (Ummm you do recall what happens when the the Lakers bench and softer spots, gain confidence in each other right???)

But I’ll get more into that later. The Spurs are one of the few teams left in the league that simply will not tolerate behavior that is considered to shine a negative light on the team. Your talent level as well as your off court demeanor weigh heavily on making it in this franchise. When is the last time the Spurs hit your city and the local hot spot listed “The Spurs” or “Player A from the Spurs” as the special invited guest… Exactly, that’s simply NOT who they are. I’m ok with it as not everybody has to fit one mode (listen that means I accept things for what they are not that I want to adopt that into my own life, I AM NOT a fan of the Spurs. Sorry)

Anyway, this brings me to the point of this post. 2nd year Guard George Hill has done what Greg Oden and countless other athletes have done, sent some naughty pictures to a female friend. Said pictures end up on The Dirty. Eh just another point for scorned females in 2010 right???

Not so fast, the Spurs being who they are had their lawyer fire off a letter to the site to have the photos removed IMMEDIATELY as they felt the photos cast the organization in a negative light. The Dirty.com’s Lawyer fired back and said they have every right to post the photos of a celeb. Le sigh. Guess what, now because of this, even more people know about the photo than probably would have because of the Spurs’ legal team over zealous reaction.

I get it, they saw the fallout with Greg Oden, as mentioned they’re a more traditional organization but, they also have to realize 1. This is a whole new era, the game has changed and 2. IT’S George Hill! While certainly the most appealing eye candy on the team, it’s not like he’s the face of the franchise or even a fan favorite ( I could be wrong about this as I’m not a fan… Yep I felt the need to tell you again) but you get my point, I think they’ve brought more attention to the issue than if they simply would’ve quietly issued a statement and let it go away on it’s own. At least that’s my opinion.

Here’s a link to the Legal Documents Check the pictures out (this time with a discreet blur over the goodies) Let me find out 2010 will be all about the Men’s naked flicks!! Piece of advice to the guys, never show your face or identifying tatts. I hear that’s the best way to participate in this activity. ::Giggles:: 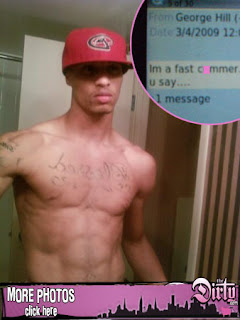 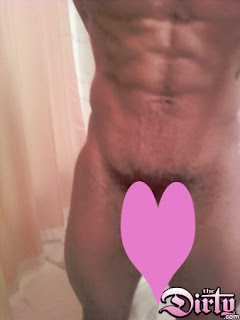 * Yeah I’m going to leave that comment in the text message about being a “fast c***er” alone.