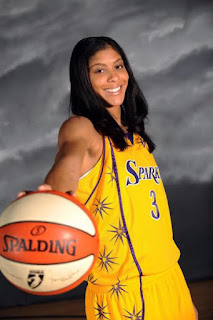 Candace Parker will make her 2009 season debut from the bench today as the Sparks face the Phoenix Mercury. Still no word if Diana Taurasi will play after her DUI the other night (Phoenix Police stay READY, DT, Charles Barkley, Jason Richardson, you athletes be safe out there). The Mercury sits at the top of the standings in the west while the Sparks are scraping the bottom at 5th.

This year was supposed to be THE year for the Sparks. So far the season has been underwhelming. Lisa Leslie sprained her knee, she’s looking to make a return towards the end of the month. But had announced this as her final year in the L. One has to wonder if the Sparks 3-5 record this season & LL’s injury is fueling Candace’s quick comeback.
Tina Thompson came back home to win, LL wants to go out on top and the Sparks have last seasons’ Rookie of the year and MVP CP3 (the female version) is anything less than a title FAILURE? I’d personally love to see another year like back in the early part of the decade where both my LAKERS and SPARKS are King and Queen of the (w)NBA universe. Here’s to the power of positive thinking! Purple & Gold for LIFE!!!