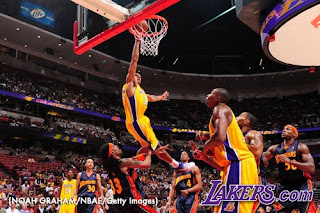 – My Lakers :::cues hearts and all things warm & dreamy:: This is ONLY the 1st pre season game and it’s against The Warriors (Clippers North) but They LOOK GREAT! Andrew Bynum looks good and like he’s almost back to his form before he hurt his knee the 2nd time.
Ron Artest scored, rebounded and defended (but on the court is rarely the issue with him) Saw a glimpse of that East Coast Queens connection with he & Lamar Odom-Khardashian
SHANNON BROWN woooo he had the SICKIEST Dunk on Mikki Moore.

This is the type of play that Ups a guy’s Sexy quotion… But yeah that was just a side note. So Anyway,

– Delonte West will be taking some time away from the Cavs (check out my camp distractions post for the cause) So far the Shaq/Bron experiment seems ok. Too early to really have any opinion on that. Although we see how quickly King James can make you ::poof:: Vanish! Just ask Former Brown newly traded Jet Braylon Edwards. ::giggles:: Ok, Bron had nothing to do with it and did Braylon REALLY lose?? He’s in NEW YORKKKK (yeah I know they play in Jersey, I got this ok) and he went from an 0-4 team to one that’s 3-1.

– My Clippers.. BD says they look different and there are Big changes for ClipperNATION. One can only hope! lol

– The Heat look like they’re repeating the same story from last season. No Veteran point, too many forwards. But it’s all about 2010 and Pat Riley has a plan to not only lock DWade back up (with a shorter MAX deal) but not just 1 other superstar but 2. All based on the notion of them getting max money but not years. He’s a magician, we’ll see but for this season, 1st round exit.

– Looks like there won’t be an AI sighting in Memphis for a few more weeks, he has a partial tear in his hamstring.

– If these 1st few games are any indication of the skill set the replacement refs have (The NBA has locked out it’s refs while a new contract is worked out) there are going to be A LOT of angry coaches and players. Some of those refs look down right SCARED to be out there. And one guy I was watching had sweat pouring down his face and it was only 5 minutes into the 1st quarter!! Step your conditioning up Sir!

Those are just a few quick observations. I’m so excited for the season to start, especially because I’m sure Kim Khardasian will be at a few Laker games so there will be LOTS of cute shoes to observe as well… Stiletto Jill is ALWAYS looking at shoes!

Oh yes Shout to the LA Dodgers, just 10 more games until the Pennant! Hometown Love NO MATTER WHAT!