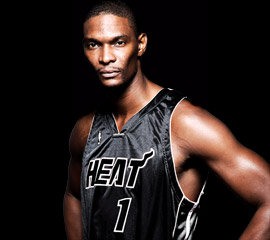 Chris Bosh has always been considered the less attractive piece of the Heat’s Voltron (old school 80’s cartoon, Kobe made this reference in case you were lost) however, last night he showed up in a big way scoring 35 points as the Heat took down the Suns 123-96 Wednesday night.

Great right!! Unfortunately, Chris found a way to mess up the warm glow of winning with his post game comments:

The “HE” Chris is speaking of is Heat coach Erik Spolestra. Ummm Mr. Bosh, wasn’t that YOU a few weeks ago saying sometimes you get lost on the court? (practice helps with that)  That’s YOU averaging 6 rebounds a game. (practice will help as you get to know your teammates preference and on court spacing, maybe you could pick up an extra 4 rebounds at least)

Bosh better PRAY Pat Riley doesn’t make his descent from the front office to take over the team! His practices are legendary and per Heat reporter Ethan J. Skolnick This Heat team has been the benefactors of more off days, early in the season, than any team he could remember in his 15 years covering the Heat.

Sounds like Bosh is just happy to be there still. That type of attitude isn’t what it takes to win. Maybe now we understand why The Raps never got far.