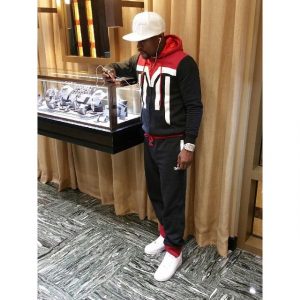 We are just six days away from the fight of the century, between Floyd Mayweather Jr. and Manny Pacquiao. One narrative of the match up, coined by Pacquiao’s trainer, Freddie Roach, has been one of good vs. evil.

There are some who feel Floyd shouldn’t be given the opportunity by the Nevada State Boxing Commission to fight because of his lengthy history with domestic violence. The blowback being that Floyd is only allowed to fight because of the economic impact his matches have on the city of Las Vegas.

ESPN has even been taken to task because of Stephen A. Smith’s defense of Floyd, and his previous comments on women and domestic disputes. Sunday, an Outside the Lines segment aired, detailing Floyd’s various charges related to assault and women, dating back to 2000. The women include both of the mothers of his four children, Melissa Brimm, and Josie Harris, his ex-fiancé Shantel Jackson, plus two women who were friend’s of Josie.

First Take host Cari Champion has been very vocal about her dislike of Floyd, and his treatment of women. She does however, respect his hard work, and skill as a fighter. But, at times it’s difficult to separate, and man from his craft.

I recently interviewed Floyd’s former CEO of Mayweather Music, Tasha Robinson-White, to gain some insight from a woman who worked with Floyd for 12 years. She claims to have never seen Floyd be abusive.

My thoughts are similar to that of Cari Champion. Given the nature of the sport, I’m not surprised that he Nevada Boxing Commission hasn’t suspended Floyd.  The question remains, is it possible that Floyd has grown from the experience? Is it possible that he feels remorse, even though he’s never shown it publicly?