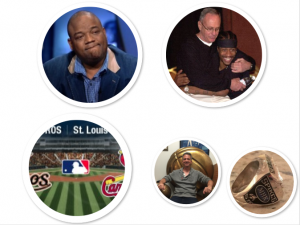 A lot has happened this week, check out the weekly rewind to see what you missed:

A lot of changes happening at the “World Wide Leader in Sports.” ESPN is making changes on both the digital and TV sides: As we continue to move forward in the process of creating The Undefeated — a new ESPN site focusing on race and sports — we have collectively decided to make some structural adjustments that will maximize the skill sets and strengths of our team, leading to the best possible output for the site and for all of ESPN. To that end, Jason Whitlock will now be entirely focused on what he does best: creating distinctive and compelling content, which will live across various ESPN platforms. Jason’s thought-provoking perspective has always been a hallmark of his work and this will allow him to completely devote his time and energy to that. As a result, he will make significant contributions to multiple ESPN entities and programs. Since returning to ESPN, Jason has been instrumental in assembling the foundation of a strong editorial team, formulating the vision for the project and collaborating with our digital product team to develop the blueprint for the site.

Continuing on the ESPN and media theme: if all goes as planned, a platform for ESPN cast-off Bill Simmons. While HBO executives are staying mum, multiple sources tell The Hollywood Reporter that the network is in talks for a major multipart deal with the biggest media personality in sports

Investigators have uncovered evidence that Cardinals employees broke into a network of the Astros that housed special databases the team had built, law enforcement officials said. Internal discussions about trades, proprietary statistics and scouting reports were compromised, “I just wish there was some way that he could be involved,” said Brown, who coached Iverson and the 76ers from 1997 to 2003, making the NBA Finals in 2001. “Just teach him about the organization and let him figure it out, figure out how he can help. He can certainly judge talent. He certainly has people’s respect. Kids will listen to anything he said. He’s certainly bright as hell.”

These new offerings will be made available during the 2015-16 season by NBA Digital to broadband and mobile subscribers on iOS and Android devices. Details on where else these new offerings may be purchased, and information regarding 2015-16 pricing for all NBA LEAGUE PASS packages, will be announced in mid-July. He was also spotted giving his ex and her new boo, rapper Machine Gun Kelly, the once over at Warriors vs. Cavs Tuesday night.