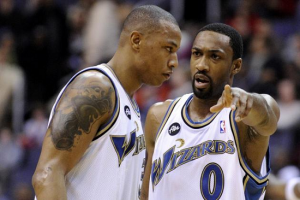 The infamous locker room showdown between former Washington Wizards’ Gilbert Arenas and Javaris Crittenton in 2009 is back making news in 2015.

Caron Butler was a teammate of the two and witnessed what went down. He even discusses it in his new book,“Tuff Juice: My Journey from the Streets to the NBA”.

In Butler’s version, the locker room standoff ended with Critt pointing a loaded gun at Gilbert before Butler convinced him to put the gun down. He said Arenas walked away quietly, looking like he realized he just went to far and almost got killed.

Arenas took to Instagram to dispute Butler’s story and as is always the case with Gil, delete it later.

g.i.l.b.e.r.t.a.r.e.n.a.si respect @caronbutler book and got my copy but the #Gunsinthelocker story is FALSE in his book…..butler and i were sleep #javale #crit #boykins were playing cards by time i woke up #crit was ballsdeep in losing so i decided to join the game…so #crit got #Booed which means he didnt get one book #spades so he had to match the pot which was 1100 but 800$ was his so he just lost 800$ and the pot now is at 1400$ and 1100$ of it is his….#javale won the first 1100$ pot so he scooped the money….#boykin asked javale “can i get my 200$ now since u have money”javale said after we land i dont wanna jinx myself….#crit spazz(give that nigga his money,u just won my money pay that nigga)so i jumped in, damn dog thats between them two niggas” he turned too me and said fuck u nigga”i said shit u owe me 200$ i think u owe #caron 300$ but we aint says shit…he pops off again”oh fuck nigga u would try to money talk somebody”so now its my deal…so earl said im out..javale said i dont need no cards……#crit needs 5 new cards so most likely he was about to match the pot ONCE again so i said im out knowing javale got A K Q so since its #crit money in the pot no need to fight if he will get boo,ed so i show my hand and #crit got mad i had 3 trump cards and didnt fight with him……so he screams,MISDEAL gil showed his hand..javale said fuck that i win i have A K Q…so #crit trys to use misdeal as a way of starting the hand over so i said yall figure that out…so i walked to the back…they stay aruging but #earl convince them that javale wins…#crit yells loud FUCKN MISDEAL..so i yelled back..come get the shit with yo hands if u wanna misdeal….so when the plane lands he walks back talking tough…saying if we were in the streets ill pop u in ur knees…i said shit ill give u the guns too do it on MONDAY…it was #sat…we had sunday off…..i get to the gym at 8am i put 4 empty guns on his chair and a note that said pick 1 no one seen me touch a gun or seen me put them there…when crit came in…i was in the training room #crit #dsteve #blache #dom were the only was in the locker room when i walked in…

Ready for part two, this is where the differences come into play.

g.i.l.b.e.r.t.a.r.e.n.a.s#PART2 so #crit says whats this shit…..i said”u said u were gonna shoot me so nigga there go the guns so pick 1..MEANING pick the one ur gonna shoot me with like u said……so he said i dont need these shits.. thats when #Caron in now in the room and a trainer..#crit takes the guns off his sit and throws it on the floor hitting the trainers foot..he runs into the training room…and #crit pulls out a little silver gun that #eddie murphy shot the pinky toe off with hahahahaha (im not gonna say if it was loaded or pointed at me,no need to bash a man who cant defend his name)lets just say i started laughing and said put that harlems night gun away..look at the shit im GIVING u,imagine what i have at home so u can keep those…………the fucking end…….javale picks up my guns and take them to my car…#caron hides crit gun in the locker room….i was in the juczzi so #crit comes in with me and we started talking he said i play too much,and i said your just a hot head…..we started shooting around…they called #crit first too say what happened ….i was last so the story became,i pulled a gun and wanted to shoot #crit BUT i owed him money lmaooooooooooooooo i owe money but imma shot u #wheretheydothatat if he owed me money,i make 20 million so i wouldnt pull GUN for 1100$ smdhhhhh…this happen dec 21…and the story was told jan1……like i said no one seen me touch,hold,grab,move anything….the funny thing is….i got suspended 50 games,charged with felony and the only teammate #crit decided to call when he needed money for his mom was MEEEEE becuz he knows i wont hold a grudge against a teammate and i gave him 60k for his money surgery…i sent money after he just said he was scared for his life……but i said dont worry about me ill take the blame do what u need to do………i do regret making fun of him and calling his bluff…….the same thing ive done with matt barness and dfish is the same shit i did that day….i wish him the beat and @caronbutler book to sell out…but what i wrote is the real story

Who do you believe? Do you think it’s even a big enough difference to matter?