If you caught the BET Awards preshow on Sunday, you saw Washington Redskins’ DeSean Jackson put it out there on the red carpet that he was interested in 106th and Park  host Keshia Chante.

Jackson was on the red carpet for an interview, but kept directing the focus of the conversation to how “good” he thought Keshia looked. Keshia laughed and brushed it off but DJacc continued. Perhaps she was trying to keep it as professional as possible. This is her job after all. Plus, she has a boyfriend.

The story continues on Instagram where DeSean posted a photo of the two on the red carpet, I guess he wasn’t happy about the “curve” and wanted to show he wasn’t tripping. His caption, “I’m on the phone tho” Kesha left a comment of her own making sure he understood that she was absolutely CURVING him, stating ‘Boy BYE ain’t nobody checking for you.” Then, she posted her own photo with the caption,”You be getting curved tho!” 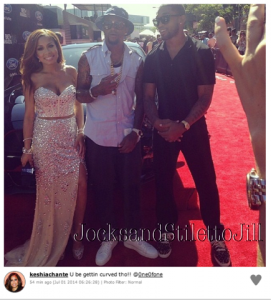 DeSean has since deleted his photo. We know DeSean isn’t shy about letting it be known he’s interested. Remember when he stepped to Rihanna last April at Toxic in LA? The result was the same as this time, CURVED.

There was a lot of that going on with the awards red carpet. Floyd Mayweather Jr. tried to say hello to TI’s wife Tiny and she ducked off down the carpet.