Ex-Patriot Aaron Hernandez wasn’t alone the night he is being accused of murdering his associate, Odin Lloyd. There were two more men with him. One is in jail with a $1.5 million bond, and the The third suspect walked into a Florida police station and surrendered Friday. Ernest Wallace told police he saw himself on TV and wanted to turn himself in. Wallace claims to have been in the area visiting relatives. He will be sent back to Massachusetts to face a single count of accessory after the fact of murder. 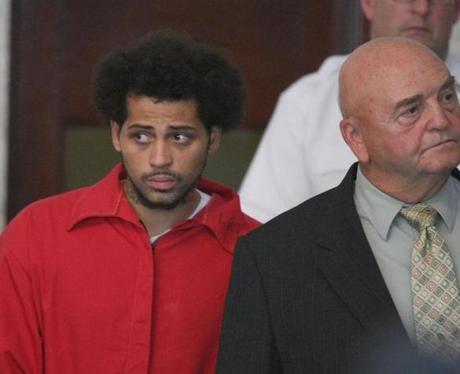 A law enforcement officials also went back to Hernandez home to look for evidence that could connect Hernandez to the killings of two men from July of 2012. Daniel Abreu and Safiro Furtado were killed in a hail of bullets on July 16th after leaving a Boston nightclub.

Abreu, who was driving a BMW sedan, stopped at a light on Shawmut Avenue at Herald Street when a silver or gray sport utility vehicle with Rhode Island plates pulled alongside. Someone from the SUV opened fire, killing Abreu, 29, and Furtado, 28. Another passenger was wounded. Two others fled the car unharmed.

The killings remained unsolved until the murder investigation of Lloyd. Per prosecutors at the arraignment and bail hearings, Hernandez created a plan to kill Lloyd after he saw him talking to people he had “troubles with,” at a Boston nightclub on June 14th. Hernandez allegedly sent Ortiz and Wallace with a text saying “you can’t trust anyone.’’

And lastly there is the civil suit that was filed prior to Lloyd’s murder by a Florida man who was also an associate of Hernandez. Alexander Bradley claims that Hernandez shot him in the face following an evening out at a Florida club and left him bleeding and alone in an industrial park. Bradley lost his right eye, and suffered loss of some use of his right arm and hand, according to the lawsuit. There are no criminal charges because he refused to cooperate with police.