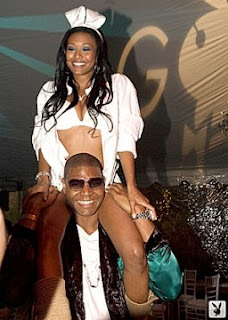 Andrew Bynum was at the Playboy mansion this weekend. SO… AND? Lots of athletes have passed through those walls (and Stiletto Jill had a few visits there too. I was geeked but that’s another story)
I love the Internet with every bit of my fiber but sometimes you have to call bullshit when you see it. He’s not going to rehab 24/7, his team is on a road trip. So what he went out.
Ok maybe he shouldn’t have had Nicole Narin up on his shoulders but that’s a great sign! It means his knee can handle heavy loads! (well not that heavy she looks like she weighs about 115) but you get the point. I’m sure he had to bend down for her to climb up there, flexiblity… CHECK!
One night at the Playboy mansion isn’t going to destroy his knee, hey it may motivate him to polish his game so he never has to deal with what happens when you become the “has been” that can’t get in. Standing outside the gates of the mansion like Eddie Kannng Jr in The Five Heartbeats (yes I know its King but he said it like that and I like it.) Do you young Bynum, as long as you come back in a few weeks ready to bang, what fun is it being an NBA player if you can’t enjoy your perks.
:::Chris Crocker voice::: LEAVE ANDREW ALONE! Now back to your regularly scheduled finals watch!