* The NBA’s top jersey list was released today Kobe is at #1 (Of course, respect the ring). Want to know whose NOT in the top 10??? Tracy McGrady (Steve Nash is coming for you TMac and he deserves it)!

Fan voting for starters has closed and announcements of the starting line up are being made tonight (Thursday) on TNT. Considering the fact that nobody is (thankfully) buying jerseys as a fashion statement, I wonder how closely this particular popularity contest relates to the one that fan voting for the Starters has become? Here’s the top 5 (Oh yeah AI is in the top 15 so there ya go):

* There are a few things you should’ve learned about Stiletto Jill by now, I love the NBA, I Love shoes, I Love LA and I support the underdog (I’m a Clippers fan, labors of love are my thing). Having said that, it makes my heart sing to point out that:

– The Thunder have moved to 6 games above .500 for the 1st time in 5 years (Probably my 3rd favorite team in the Western Conference right now)

* Tyreke Evans (Kings rookie) is one of two players in the NBA averaging 20 pts, 5 reb, 5 ast. The other is LeBron James 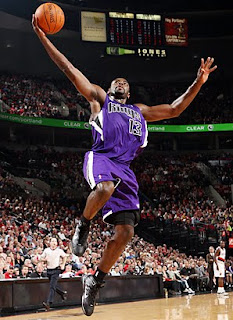 * Retired NFL player Warrick Dunn became a partial owner of the Falcons in Dec. Maybe one of the retired Pistons can buy into the team as it is officially for sale now. Or whose the next R&B/Rapper? Actor to get their ownership on. Here’s a partial list of a few celeb owners:
– Jay Z- The NJ Nets
– Usher- Cleveland Cavaliers
– Nelly – Charlotte Bobcats
– Magic Johnson – LA Lakers
– Venus & Serena Williams, Fergie, Jennifer Lopez – Miami Dolphins 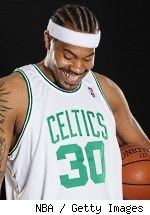 * I also like to point out that the more things change, the more they stay the same. Rasheed Wallace was fined $35,000 for criticizing the officiating after the Celts lost to the Mavs on Monday. 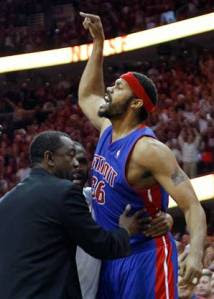 Sheed telling the truth about NBA Refs since 2000