* Clearly DWade should’ve moved out of bron’s way… But you have to respect the fact that Dwyane was thinking of the game and not the fact he’d be on a highlight reel for the rest of the week… But alas, here he is, in a highlight. It’s a work of art!!

DWade had 30 in the first half but came up way short in the 2nd. Cavs take this one at the wire!! Great game from tip off to the final seconds!

* What happened to Atlanta Hawks coach Mike Woodson’s eyebrows. He shaved them, they’re GONE. not like shaved and replaced with powder and eyebrow gel. JUST VACANT… I can’t… really… I can’t 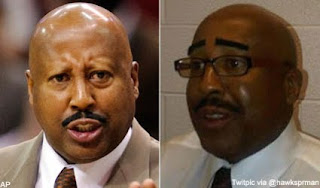 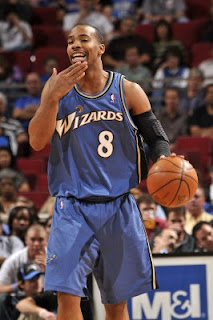 * Javaris Crittenton (AKA “the teammate” Gilbert had the gun sitchy with) has reached a plea agreement where he pleaded guilty to a misdemeanor gun charge and was sentenced to one year of unsupervised probation. Now it’s time for the Players Association to step up on Gilbert’s behalf and sort out the actual length of his suspension and what happens to his contract with the Wizards. Gilbert is scheduled to be sentenced at the end of March. We’ll all be waiting for the outcome ::does the Gun finger dance blowing you all away:: uhhh wrong time maybe… yes… Ok. My bad

* It’s trade season. Just a few weeks until the trade deadline and so far we’ve had 2 trades in the past couple of days, both cost cutting measures (in my humble opinion) and both involving the Hornets:

1st trade The Hornets Devin Brown was traded to the Bulls for Aaron Gray.  mmmmmk moving on.

The 2nd trade involved My Clippers and the homecoming of an LA Native. Guard Bobby Brown was traded to the Clippers for a 2014 2nd round pick, cash and 2 pieces of Bubblegum (ok not the gum but come on salary dump) At any rate, welcome to Clipper Nation!!

*Random picture of DeAndre Jordan & Chris Kaman I got from the Clippers official twitter, they look excited! 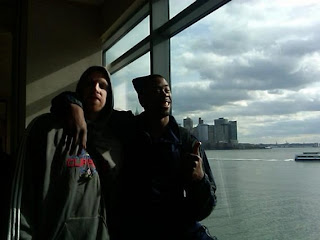 * So The Celtics Glen “Big Baby” Davis no longer wants to be called Big Baby. Celts are currently 2nd in the Eastern conference so we can take a moment to delve into his foolishness… let’s be honest, the fact that you allowed “Big Baby” to follow you to the NBA to begin with shows right there you don’t use a lot of forward thinking. You further  convinced us that something wasn’t quite WRONG with the 2 B nickname when you posed like this 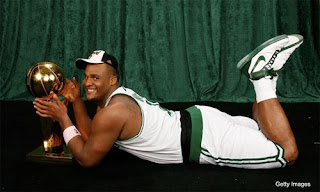 Then to add to that lil faux paus, you cry on the bench OPENLY during a game (I’m all for a man getting inside his feelings but not at this moment) because KG yelled at you.

You were just fined because you let a fan heckling get the best of you and you cursed him out (Yeah I know some of those “fans” are down right RUDE but just smile and think about your check, chances are pretty good his won’t match it)

But now, you want a new name… What about Toddler. I mean it shows growth no?

* Keep watching the Charlotte Bobcats & The Memphis Grizzlies… that’s all

* Last summer my absolute FAVORITE on Twitter was Stephon Marbury and his UStreams/JustinTV foolishness. He’s been pretty quite since late Sep (someone finally talked some sense into him maybe) But now, he takes his show to the Far East (China) to play with a team over there. Good Luck Starbury 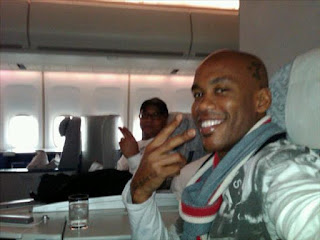