Kobe Bryant’s leadership skills have been on full display this season. Even when he’s at home watching the Lakers play from the couch due to injury. Kobe guaranteed the Lakers would make the playoffs a few months ago and though it was rocky, not only did the Lakers make it, they moved up to the 7th seed.

What did the Black Mamba do to thank his teammates for making him Nostradamus when so many doubted the Lakers? He bought them laptops:

Thanks for the laptop @kobebryant ! On our way to San Antonio. twitter.com/SteveBlake5/st…

@steveblake5 No prob. Gifts for not making me look like an idiot with my playoff guarantee Ha. You guys know what to do #getem #focus — Kobe Bryant (@kobebryant) April 20, 2013

Meanwhile, Nike shows that they have faith in Kobe. They placed an ad in the LA Times today that Kobe discovered this morning: 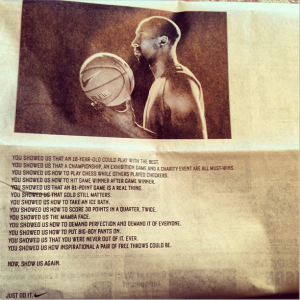