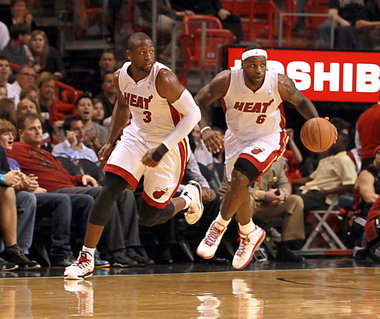 When Palm Beach Post reporter Ethan J. Skolnick tweeted a few quotes from his two separate interviews with Dwyane Wade and LeBron James about their friendship and playing with one another. I knew without a doubt the quote that would get the most headlines

There is absolutely nothing wrong with this comment. But the way it works in LeBron’s world, the slightest thing will make his detractors say “see I told you he has no heart.”  We all know LeBron is in a precarious postion where it seems every “decision” (ha) he makes is the wrong one. But that statement seemingly points to the weakness in King James.

Check out some of LeBron’s comments on DWade and why DWade thinks their pairing works:

“There’s been times when he wanted me to be more aggressive, where I made a play or made a pass that I could have finished or done something else,” James said. “And he gets on me too.”

“Friendship,” Wade said. “Respect. As players, but also off the court. So we can have moments where we can say things to each other than we might not say to other guys, and neither guy takes it a certain way.”

Chris Bosh is always left on the sidelines in this discussion.