The 2016 NBA season kicked off on Tuesday with the Cleveland Cavaliers receiving their rings, then proceeded to light up the New York Knicks 117-88. Check the highlights including LeBron’s speech – hint this season is Cleveland vs. everybody – The Undertaker showed up and Khloé Kardashian makes her Cavs courtside debut. The Cavs got some really big rings and even managed to troll the Golden State Warriors 3-1 collapse. The rings were designed by Kay Jewelers: 6.5 carat, 400 diamonds, set in 10K white gold & 14K yellow gold. They feature the Cavaliers’ “C” wrapped around the Larry O’Brien trophy on one side and the Cleveland skyline on the opposite side. Owner Dan Gilbert promised to give rings to all employees including ushers and stadium chefs.

There’s just not enough words I can put together to express the feelings I had when I received this last night! Emotions was running heavy and I’m just so proud of my teammates, their joy and happiness receiving theirs as well! It was a SPECIAL night to say the lease and I’ll never forget that moment for the rest of my life. Final thing THANK YOU and you’re extremely welcome to our UNBELIEVABLE fans for sharing that moment with us because honestly we did it for yall! #StriveForGreatness???? #RWTW???? #TheKidFromAkron???? #TheLand???? The theme of the King’s Speech, “Cleveland vs. EVERYBODY”

Khlo Money makes her courtside debut to cheer on her new boo Tristan Thompson. Naturally she Snapchated quite a bit of the evening including showing off her hand – the left one by the way with some interesting jewels – and Tristans The rumors are that Khloé and Tristan are engaged or plan to be soon. Khloé’s divorce from Lamar Odom was finalized this week, while Tristan is expecting a son with his ex-girlfriend Jordan Craig. 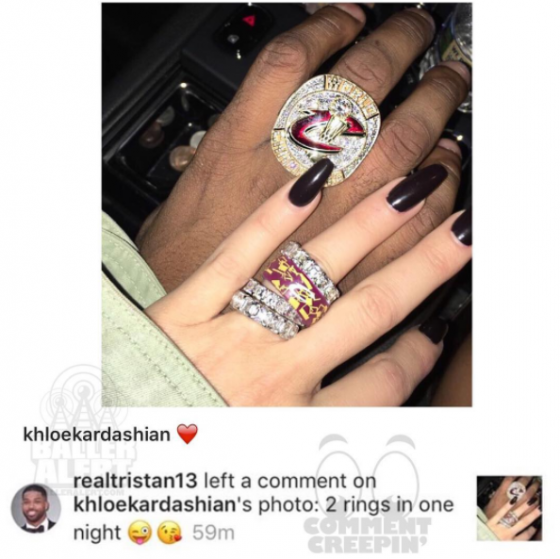 Before the game, wrestling legend, The Undertaker showed up to Quicken Loans Arena after Lebron wore one of his shirts to Game 5 in the finals. The two had no prior relationship, The Undertaker just wanted to return the love. Sounds like The Undertaker has a surprise in store ???? pic.twitter.com/D6MvEx9JJg