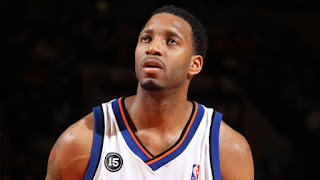 *Tracy McGrady and Eddie House made their Knicks debut on Saturday against the Thunder. The game was exciting, it went into overtime. TMac scored 19 in the 1st half. Tim Grover has the secret formula. OMG it’s a true life fairy tale right??? Not exactly, The thunder win, Knicks lose the next 3 games

Well for at least a second we saw a glimpse of what “could” happen with TMac and 2 other stars (as he indicated he’d be happy to take a lower salary to help bring in two superstars this summer) Interesting, we still have 20 plus games to watch this unfold. 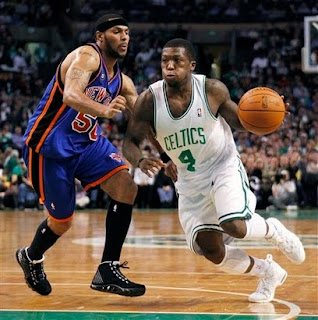 *Celts and Knicks played last night, the introduction of Nate Robinson as a Celtic. Eddie House received a warm welcome from the Boston crowd.Celtics win.They’re now #3 in the east. 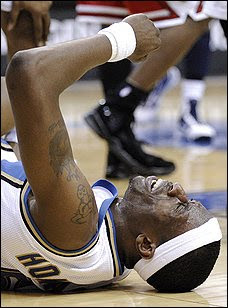 * Wizard Josh Howard has torn his ACL is out for the season. Josh will be a free agent at the end of this season. It’s tough break coming on the wheels of a trade in a contract year. Ironically, Washington has won it’s last 3 games since last weeks fire sale. Yep it’s just been a little over a week. 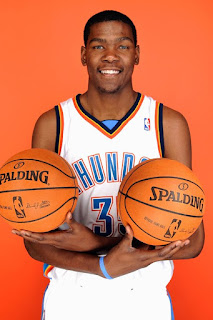 * Kevin Durant has scored 25 plus points in the last 29 games. In 23 of those games KD scored at least 30 and for the season he’s scored at least 25 in 33 games. Yeeeaaah that’s Hot FIRE in OKC!! Thunder had won 9 in a row until their last second lost to the Suns. They’re #6 in the west. Are you on the Bandwagon yet? There’s still room & time!

* Kobe was back in the line up last night after 18 days of rest, team only lost 1 game while he rested. All 4 wins were by double digits, the lost was by a point. Oh Last night, Kobe: 9 points, 5 rebs, 3 assists in first quarter. Oh he hit the game winner too 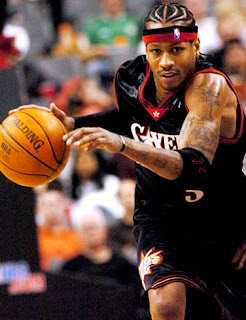 * AI will be away from the Sixers indefinitely while tending to the care of his daughter’s mysterious illness. I don’t think we’ll see AI back on the court period. If that’s true, at least he made his exit on the team that introduced him & bling to the NBA. The Sixers brass shot down rumors they were waiving AI and also indicated that he’s been a model citizen since he’s been back with the team. Good luck to him and his family

* And now something to file under “Dreams Can come true” The Knicks’ Sergio Rodgriuez grew up idolizing several NBA players but his absolute favorite, Tracy McGrady, when he was 16 he went to an Adidas ABCD camp in Berlin. He not only won MVP, he also got a picture with his favorite player that was in attendance… Tracy McGrady. Fast forward a few years and they’re teammates! Hey, I thought that was sweet!! 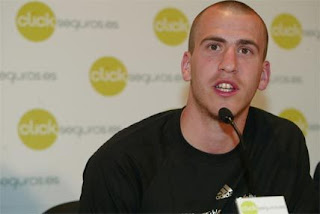