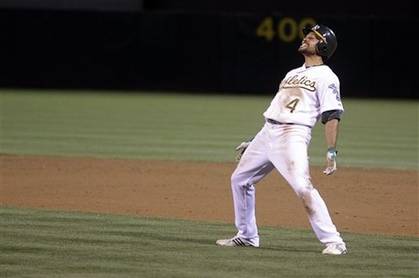 Chances are if you aren’t from the Bay Area, you aren’t familiar with a dance called the “Bernie lean.” It got it’s inspiration from the 80’s throwback film, “Weekend at Bernie’s.” Well the Oakland A’s know what’s up. In fact, they made their own version of the video with the song’s creators, ATM and IMD.

LOVE!! The song is even Coco Crisp’s at-bat song and the A’s celebrate with it in the dugout. Last season a few of the Warriors incorporated it into their player-intro rituals too.

I suspect will be seeing a whole lot more of this as the A’s are in the pennant race.