I told you years ago in my book, PostGame Pass: access into “the life” that pro athletes have secret social media accounts. Over the weekend, some Reddit users discovered Golden State Warriors star Kevin Durant‘s alleged secret Instagram account.

Cupcake KD has been gently going at fans all summer from his public Twitter and Instagram accounts. But sometimes you want to post and express yourself like the average fan in America – with reckless abandon and zero fu*ks given.

KD has had a private account for years. But since the Dubs won the title, that account has been a bit more active in the comments. Here’s how the users cracked the case:

First up, his brother Tony tagged KD with the account while they were in Hawaii a few weeks ago. He’s been doing this for years off and on, but this time more people seemed to notice. Perhaps its because alleged KD was going at people in the comments. The sultan was using all sorts of colorful language to point out these “fans” don’t play and would be asking KD for a pic for the gram if they saw him in person. 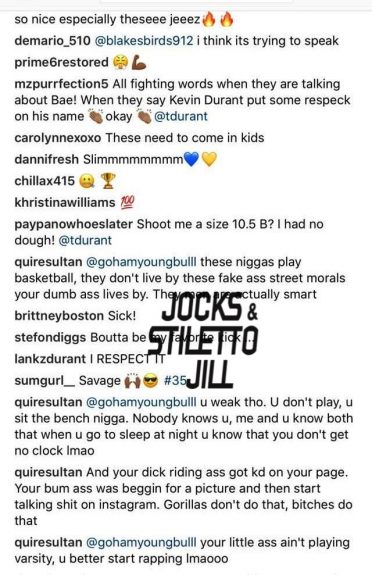 Also, a bit more detective work uncovered that the name of the account “quiresultan,” is a play on a street in the neighborhood KD grew up in. Actually one street over. Another clue, the photo on the account was a scene from “Goodfellas” reportedly one of KD’s favorites.

This isn’t the only social media mystery with KD. There was the incident that happened on Twitter a few days ago. KD responded to a few tweets where he answered in the third person and implied it was Billy Donovan and Russ that made him shake OKC. KD later deleted the tweet and said he got confused by the Twitter users questions. 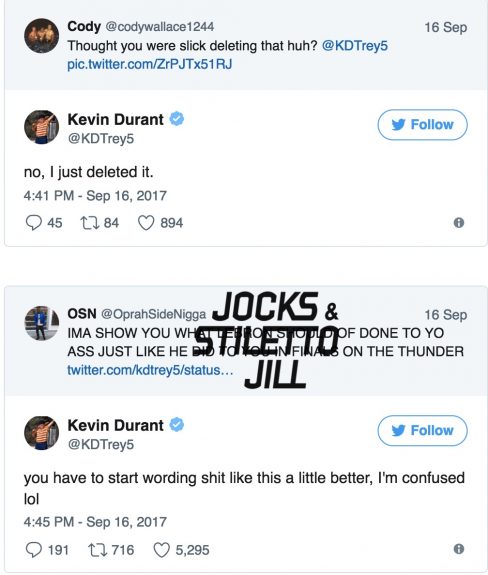 I bet KD’s social media manager is going crazy today. I also bet that account is going to be very hard to find…