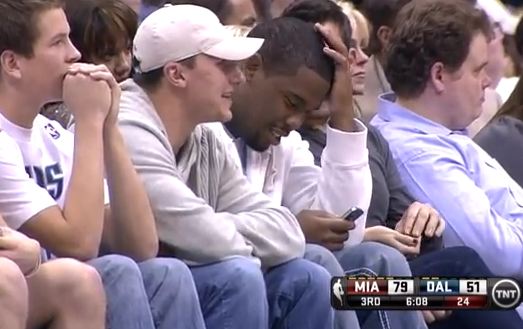 With all the NCAA investigtions that have been popping up, any mention of a benefit to a student athlete is going cause people to climb in their feelings and become über sensitive.  Case in point, during Thursday night’s Heat vs. Mavs broadcast on TNT, Steve Kerr asked how Johnny Football AKA Johnny Manziel, newly minted Heisman trophy winner and current Texas A&M student- sitting courtside for the game. His comments seem to make everyone on the broadcast nervous pushing out disclaimers in post game interviews and on “Inside the NBA.”

Here’s the thing, he also was courtside in Houston on Wednesday for Rockets vs. Sixers, he even got to go into the locker room and hit his Heisman with James Harden I’m going to assume each ticket was around the league average $600 apiece. Obviously in Markets like LA, New York and Miami they’d be higher but in the grand scheme of things, that’s pretty reasonable, right?