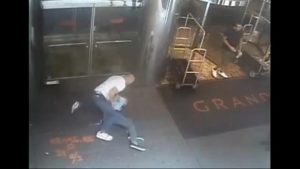 The NYPD has released video of former tennis star James Blake being taken down by an officer in a case of mistaken identity.

Blake was standing in front of his Manhattan hotel earlier this week, when a plain clothes officers comes running up out of nowhere and tackles him. Reportedly an eyewitness had identified Blake as a suspect in a credit card fraud investigation. They then proceeded to leave Blake in handcuffs for 10 to 15 minuted before checking his ID and confirming they had the wrong person.

Is that the normal procedure for taking down an unarmed “suspect?” Officer James Frascatore (38) has been suspended and stripped of his gun and badge. NYPD Police Commissioner William Bratton issued an apology to Blake, which he declined.