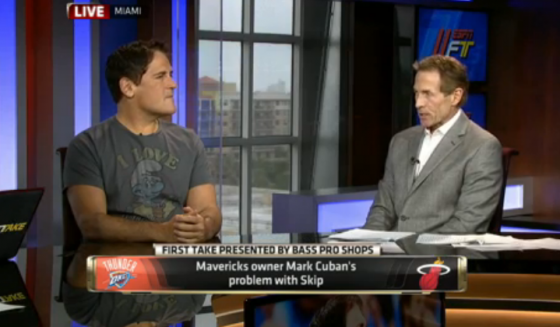 ESPN’s First Take has become one of the tent-pole programs of the network’s line up. Skip Bayless is often times considered to be purposely rocking the boat just to get viewers to tune in. Skip’s narrative on LeBron James calling him things like Prince James and the ringless king have at times felt more like harassment than critique. On today’s show, Dallas Mavericks owner came on to debate Skip after the two had a mini exchange on Twitter.

Cuban made for an interesting foe for Skip as he highlighted areas that generally aren’t discussed on the show. At least from a true “insider’s” perspective.

Of course the main idea is to lure viewers in and to keep them returning but at times the overkill of certain dialogs (Tim Tebow and LeBron are two of the most glaringly obvious to point out) can be a turnoff. I am pleased that they’ve opened up the panel to wider variety because the repetitiveness was running a tad stale in my opinion.

One thing though, I don’t believe for a second that it wasn’t a conscious effort last season to keep Cuban out of the headlines when the Mavs were on their finals run. He didn’t change at that moment. That was focused intent.