When I first heard the Kobe Bryant’s mother Pamela was auctioning off his high school memorabilia, my spidey senses immediately knew that things weren’t all the way right. Now comes word that Kobe has sent a cease-and-desist letter to the auctioneer, Goldin Auctions L.L.C. Pamela received an advance of $450,000 of the estimated $1.5 million that the auction was expected to bring in. Apparently Pamela wanted to purchase a home in Nevada and needed a down payment. 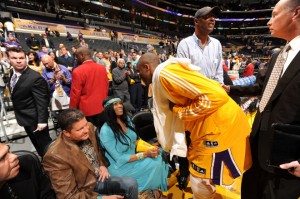 Goldin in turn filed suit asking a judge to clarify ownership of the items which have been in Pamela’s possession for years. At some point after Kobe married his wife Vanessa, Pam asked her if she wanted the items and Lady V allegedly said no those are from the past and we’re moving forward. It’s no secret that there was animosity at times between Vanessa and Kobe’s family and by default, Kobe and his family because of it.

According to the lawsuit, Pamela Bryant had been storing some of her son’s memorabilia for at least 15 years – his high school uniform shorts and jerseys date back to 1994 and there’s even a Sonny Hill League Future Stars Champion trophy from 1992, when he was still in middle school.

Seven or eight years ago, well after Kobe had gotten married, Pamela Bryant asked her son’s wife, Vanessa, if she wanted the items. She said no – those items belonged to the past, according to the suit.

And so, five years ago, the lawsuit says, Pamela Bryant packed up the jerseys, the championship rings, and award plaques, spending $1,500 a month to store and insure them in West Berlin.

In the last few seasons – beginning in 2010- and again following Kobe’s divorce announcement, his parents were spotted back at games and around but it appears since the reconciliation that relationship is once again strained.