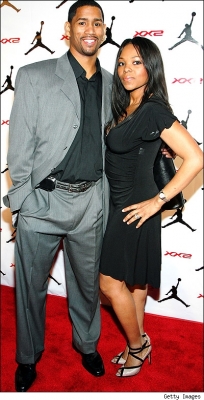 Shaunie O’Neal mentioned two new cast members had been added to the fold for season 4 of Basketball Wives Miami. Looks like their identities have finally come to the surface.

Kenya Bell is the ex-wife of Golden State Warrior Charlie Bell. Charlie and Kenya are currently divorcing and, the couple had an altercation earlier this year that involved Kenya allegedly cutting Charlie with a box cutter . So far, she’s the one that’s beefing with the circle.

The other new cast member is Kesha Ni’cole Nichols. She was dumped in 2009 by her ex-fiance, San Antonio Spur Richard Jefferson, via e-mail the night before the wedding. The two dated for five years. Richard ended up paying Kesha a six-figure settlement to help her “start her new life.” She’s said to be very open about the break up. Guess that means it wasn’t hush money since she’s on the show.

Those are certainly two interesting cast additions. I’m interested in Kenya’s back story. Unlike the majority of exes, Kenya was with Charlie before he was drafted. Kenya also has a BS in Mechanical Engineering and an MBA.