How was your holiday? A lot of your favorite jocks and jock affiliated were in Las Vegas for Memorial Day weekend. Rehab at the HardRock, The Pool at the Palms, 1Oak, etc. Those were just a few of the spots your favorite jocks partied at over the weekend. Some of your favorites in attendance; 49ers’ Colin Kaepernick, Lions Reggie Bush, Eagles DeSean Jackson, Nuggets Ty Lawson, JaVale McGee and Kenneth Faried, Raptors’ Rudy Gay,  Cavs’ Wayne Ellington and Dion Waiters, Clippers Matt Barnes and Maalik Wayns, Warriors’ Jarrett Jack, Klay Thompson and Brandon Rush, Wizards John Wall, Nick Young, Floyd Mayweather Jr., Lala, Draya, Gabrielle Union and more. A few fans were upset that John Wall was indulging in portable hookah. Guess they thought it was something else. 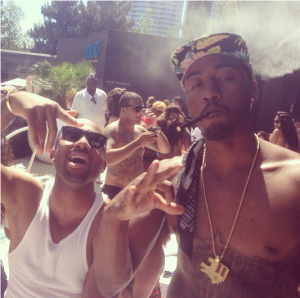