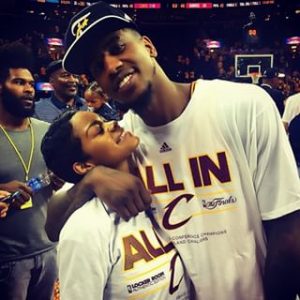 Cleveland Cavs guard Iman Shumpert has a lot to celebrate this offseason. Not only did Shumpert re-up with the Cavs on a four-year-$40-million deal this summer. He and girlfriend Teyana Taylor have announced their expecting a daughter in January.

The two have been in a relationship for over a year. Taylor is currently on Chris Brown’s “One Hellva Night” tour, and Iman has been traveling with her.

A few weeks ago rumors popped up that Taylor was pregnant. Shumpert defends their choice to wait until they were ready to let the world know. It’s the first child for both Iman (25) and Teyana (24).

When a man loves a woman how she was born to be loved…procreation is the best blessing you can receive! I couldn’t be more happy than to share my first child with the woman I intended to have my family with. Iman Tayla Shumpert Jr is expected to enter this world “1.16.16”. We want that world to be as pure as possible for her. We people, show the world what we feel the world should see when we want them to see it…something this beautiful had to be announced when we were ready for everyone to know…this is what happiness grows into! I love you @teyanataylor thank you for your sacrifice in starting our very own family! P.s. I know you see my daughter with her hand behind her head and her feet kicked up…????????…she’s already daddy’s little girl!!!

I like them as a couple. They seem to really fit together.

Teyana’s ex, Detroit Pistons guard Brandon Jennings, also has a baby on the way with actress Lashontae Heckard. Brandon “Deuce” Jennings is due this fall.