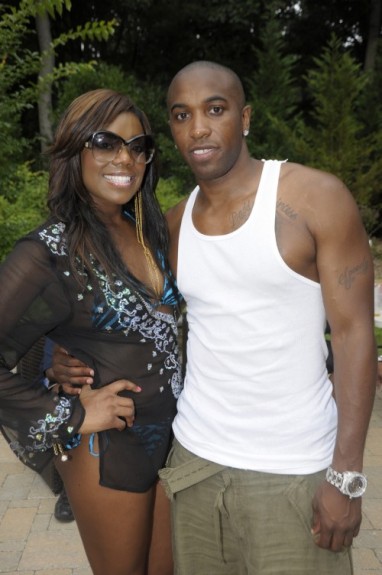 Meeka Claxton was a polarizing figure on season 3 of Basketball Wives. She recently sat down with Black Enterprise to give a more balanced look at who Meeka is and her business, what being a “basketball wife” means to her and if she is pressing on with her lawsuit against Tami:

Let’s talk about the show, why did you decide to join the cast? Was it because you wanted more attention for your business and personal brand?

There was only one intention of mine when I decided to do the show. A mutual friend of Shaunie’s and myself said I should do the show and show the world and kind of represent for the ones who’re still together [with their men] because we weren’t really being represented. I said “You know what? I’ll do it.” And I thought it’d be a great chance to show a wife who’s not just sitting at home but building something outside of my husband, while at the same time we support each other one hundred percent. The dynamic is really cool between my husband and myself and we have a great little family, too—my kids are amazing. My oldest daughter is an actress-model who’s been in two independent films. That was my only intention. It had nothing to do with my brand. As far as the real estate company, we just recently got a Web site when we decided to open the doors to the military. Before then we’d been operating fine just through word of mouth. I wanted to show that we’re out here doing stuff; not just out here spending money—we do that, too—but we’re not only doing that.

Has the show had a negative effect on your brand or business?

It definitely has not affected my marriage or my business. Those are my number one concerns. But I’m a viewer, too, and I see how I was portrayed. Like I tell everyone, you’re getting the tiniest most miniscule snippet of what happened over three months. You’re not getting all of me, so you really need to get to know me. Follow me on Twitter, read more interviews with me, and to get to know the other 99%, because I’m a lot more than what people are saying [I am].

How do you balance marriage, motherhood, business and your new-found celebrity?

The only way I know is prioritizing what’s most important, and that’s my family, so nothing was going to come before them. Luckily my husband scouts for the Golden State [Warriors] and his work didn’t start until June, so I was lucky that filming fell between the time that he was home and not doing anything so he could help me out a lot. He was there for me and he wanted to show a real family doing big things, I guess. If it wasn’t for him, I couldn’t have done it. We’re so close-knit. We’re not really about the nannies and all of that, but we do have family who can help, and we fly in my mom and dad from time to time. His parents are here in Long Island, so we have family help, but we don’t let them stay 24/7 to do that. That’s not their job. My priorities are my family first, my business and then everything else.

I must say in person you come off a lot more positive than you seem to be on the show.

That’s me. Being a basketball wife we have a community called “Behind The Bench.” That’s a community of the wives, girlfriends, the sisters of current and retired players. We’re all about supporting each other, building each other up and just making sure that we have each other’s back—like if you need to call someone, we have a binder of everyone’s phone number and address. So if you need to call them to support your event or something, you can do it. That’s what I know a “basketball wife” to be. It’s a special bond, it’s a unique bond. I’ve always been positive. I’ve never been a Negative Nancy, so this is new to me….

Given your experience and how you were portrayed on the show, do you think you’ll be returning next season?

Are you agonizing over the decision now or what?

Truth be told, I’m under a contractual obligation not to answer that question.

Oh OK, that’s understandable. Now about the situation with Tami Roman, is your lawsuit against her still pending?

Yeah, the lawsuit is actually still pending. I did an interview and they asked me, “if she does want to talk to you and has learned her lesson, would you drop the suit?” I mean, that’s all I really want. I don’t need any money, I just really wanted her to know that you can’t [resort to violence] as a grown woman. I mean, I just turned 32. I was 31 when we were filming and she was 41. It’s like I’m a kid to you, so I felt like if I know better you should definitely know better. It was more like I said, a lesson you can’t just go around putting your hands on people because you don’t like something or you don’t like them. You have to learn to verbally express yourself no matter how hard that is. The lines of communication are open on my end so let’s see [what happens].

So you’re willing to drop the suit if you feel like she’s learned her lesson?

Yeah, I hate to say “lesson” because she is a grown woman, but it’s more like if she realizes what she did was wrong. That’s the way I want to say it I don’t want to say “learned her lesson.” If she honestly has some kind of remorse and can work on that then yeah, I’m grown and I have no problem talking to her.

How do you feel about how you were portrayed on the show?

What I had to remember after the first episode is that this is TV, and even though it’s reality [TV] and I say the things I say, I am not a troublemaker. I am a reactor. Also, I have learned that TV’s for entertainment. We filmed for hours on end, I’m tellin’ you. We filmed for three months and I was only home for less than 30 hours a week, a little over a day a week just to see my kids. I made sure of that. So can you imagine filming that much and you’re only seeing two minutes a week of me or maybe five minutes? That’s really what, 50 minutes over the whole 10 weeks? You really don’t get to see anything. I was saying to my husband after the first episode: “I’m good and I know me and I know all of me, so if they’re only showing a certain percentage…” We had a lot of good things and positive things filmed, but it is entertainment and things are going to be highlighted for TV. I signed up to do . Although I wanted to show one thing, I can’t be mad at it that that didn’t happen. I have opportunities when I’m doing charity work and interviews to show who I [really] am so it is what it is. People see me on the street and they even think I don’t think I look like what I look like on TV. Again I was in a hundred degree of heat for 13 hours a day, and I definitely didn’t look like what I normally look like. I laugh because my business picture’s been on line for years [laughs]. You can Google me and see what I look like.

What other ventures of yours should we be looking for?

I’m writing a book with my business partner. She and I are all about empowering women and we’ve been coining the term “Million Dollar Girls.” We’re going write a book with that title that’s an investment guide for women and start and investment club for women. And on the other side of things, I’m about to launch MC Beauty, a cosmetics line for women of color who have trouble finding make up to match their skin tones.

I recognize Meeka has a contract that she signed with VH1 but it is still troubling to me that she’s so willing to return to a situation that did nothing to showcase all that she’s listed above. As for her possibly dismissing her lawsuit against Tami, the lesson is only learned if you actually follow through. At least that’s my opinion of this particular situation.

It’s also interesting to me that the ladies often choose the same areas to expand their businesses. Books, make-up etc. Not knocking anyone striking out on their own but a little originality in the mix never hurts. I wish Meeka luck though. As I always say, it takes a lot to open your life for cameras.